The Double Indemnity House, from Book to Film to Reality 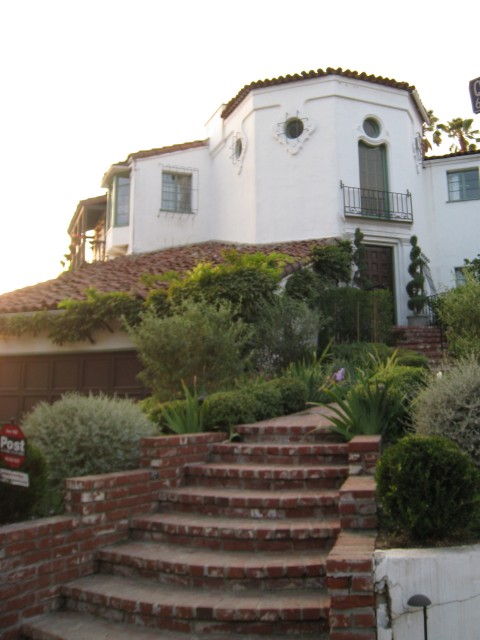 Few houses in the movies are better known than Barbara Stanwyck’s Spanish Colonial in “Double Indemnity.” The director Billy Wilder first shows it in an establishing shot that highlights not only its architectural features but its distinctive site–a hilly corner lot on a sparsely-built suburban street.

Though the script states the house is in Los Feliz, it is actually located in the Hollywood Dell. I’ve always thought the house beautiful and well-suited to its penninsula-shaped lot, but  Billy Wilder and Raymond Chandler, who co-wrote the screenplay, could not have agreed less. Here’s how they introduce it in a voiceover by insurance salesman Walter Neff ( Fred MacMurray):

It was one of those California Spanish houses

everyone was nuts about 10 or 15 years ago. This

that is, if he ever finished paying for it.

Their opinion of the house plummets when Neff goes inside. Wilder and Chandler describe the interior as:

curves down from the second floor….All of this,

James M. Cain, who wrote the book on which the movie is based, no doubt concurred because his own description is even more withering:

It was just a Spanish house, like all the rest

of them in California, with white walls, red

tile roof, and a patio out to one side. It was

built cock-eyed. The garage was under the

house, the first floor was over that, and the

rest of  it was spilled up the hill any way

they could get it in.

Interestingly, Double Indemnity locates the house not in Los Feliz but in Hollywoodland, where Cain himself lived.

James M. Cain's House, to the left of the Hollywood Sign/Hope Anderson Productions

Whether Cain’s contempt for the house was based on some hatred of Spanish architecture or the fact that Hollywoodland began as a tract development– albeit an expensive one–is unclear. But it does seem ironic that he should have disparaged the place for spilling up a hillside when his own Norman-style house–five stories’ worth–spilled down another hillside a mile away.

In any case, the Double Indemnity House looks much better today than it did in “Double Indemnity.” Mature landscaping and the presence of other houses have softened its exterior, eliminating the sun-baked starkness that made it a believable setting for adultery and the hatching of a murder plot. And, as shown in a recent spread in the LA Times, the vibrant interiors have come a long way from the white walls and heavy Mission-style furniture featured in the film. In fact, the house radiates prosperity and warmth.  At Christmastime, decked in wreaths, garlands and lights, it is among the most beautiful in the neighborhood.

§ 5 Responses to The Double Indemnity House, from Book to Film to Reality

You are currently reading The Double Indemnity House, from Book to Film to Reality at Under the Hollywood Sign.