The Granite Stairs of Hollywoodland…and This Weekend’s Big Parade

There are six of them, staircases that connect the lower and upper streets of Beachwood Canyon north of the Gates. They were part of the original design of Hollywoodland, a housing development conceived by Harry Chandler, whose main occupation was business manager (and later publisher) of the LA Times.

Hollywoodland was the first housing tract in the Los Angeles hills, which had yet to attain desirability among homebuyers. Perhaps in an effort to make hillside living safer and more appealing, Chandler and his developers, Tracey E. Shoults and S. H. Woodward, imported a crew of stone masons from Italy to construct not only the impressive Hollywoodland gates and staircases but a network of massive retaining walls.

The masons lived in a tented camp at the end of Beachwood Drive, just before the end of the paved road and the stables. (Houses were built there in the early 1960s.) From 1923 to 1925, they built miles of walls and stairs using granite from the Union Rock Quarry in Bronson Canyon, just over the hill to the east of Beachwood.  All the granite for the chimneys, hearths, steps, terraces and walkways of the original Hollywoodland houses came from the Bronson quarry. (It is now commonly known as the Bat Caves because its main tunnel–through which trolley cars transported the stone to Beachwood–was used in the “Batman” TV series and 1960s movie.) 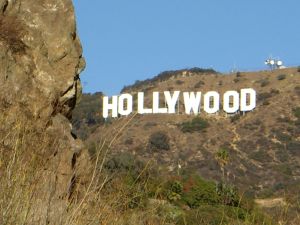 This weekend, a 2-day walking tour of the historic steps of Los Angeles begins on Saturday morning at Angel’s Flight and ends on Sunday evening at the Hollywood Sign. Called The Big Parade, the event has as its midpoint the historic Music Box Stairs in  Silver Lake, where Laurel and Hardy pushed, pulled and lost a crated piano in the 1932 film, “The Music Box.” On Sunday, just before the final leg to the Sign, I’ll be giving a brief talk on history of the Hollywoodland granite stairs. For more information and a schedule, please go to www.bigparadela.com

You are currently reading The Granite Stairs of Hollywoodland…and This Weekend’s Big Parade at Under the Hollywood Sign.