Hollywood Before the Movies, Part II: City of Churches 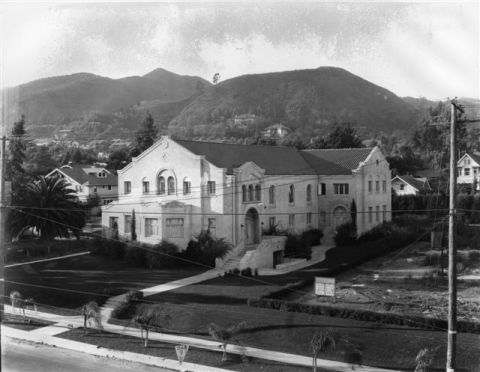 In December of 2007, a bus carrying audience members to a taping of “The Dr. Phil Show” at Paramount went out of control on Gower Street and crashed onto the lawn of the First Presbyterian Church of Hollywood. Reading about the accident online, I was annoyed to come across this comment: “Who knew there were churches in Hollywood?”

As anyone who has visited can attest, Hollywood is full of Protestant and Catholic churches; it boasts three major synagogues and temples of various Buddhist and Hindu sects as well.  In addition, Hollywood has long been a hub for nontraditional religions, from the Theosophical Society in the early 20th century to the Church of Scientology today.  But all these houses of worship merely hint at the town’s religious history: from its beginnings in the 1880’s to its absorption into Los Angeles in 1910, churches were Hollywood’s raison d’etre. 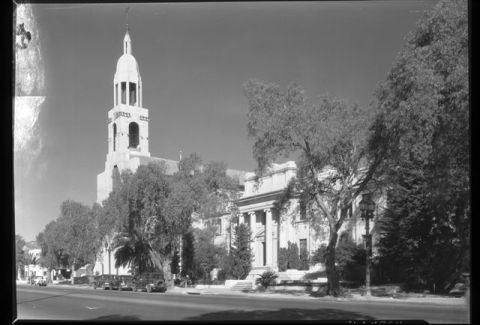 Hollywood’s powerful religiosity sprang directly from its founder,  Harvey Wilcox, a devout Protestant and vehement teetotaler. In order to draw like-minded residents to Hollywood, he granted free land for church-building. Although Wilcox didn’t live to see the ultimate result, large houses of worship dominated Hollywood Boulevard by the beginning of the 20th century.

Hollywood’s original churches have all been rebuilt since, though many of the names–Hollywood Presbyterian, St. Stephen’s Episcopal, Church of the Blessed Sacrament and Hollywood Methodist Church–remain the same. Interestingly, St. Stephen’s traces its lineage directly to Daeida Wilcox,  mother of Hollywood. Tired of commuting to Colegrove (now West Hollywood) to worship at St. James’ Mission, she donated land at Prospect (now Hollywood Blvd.) and Ivar for a new church. At that point, most of the congregation and even its rector relocated to Hollywood, sharing quarters with the Catholics at Blessed Sacrament until St. Stephen’s was completed in 1903.

You are currently browsing entries tagged with St. James’ Mission Colegrove at Under the Hollywood Sign.