Clara Bow in Beachwood Canyon: The “‘It’ Girl” on Glen Green

At some point in her incendiary silent film career, Clara Bow lived at the top of Glen Green, in a house not visible from the street. Old timers in Beachwood still refer to it as the Clara Bow House, even though it has long been the home of a well-known person who would prefer not to be named. From his description, it seems likely the house was built for a member of the Theosophical Society, or one at least acquainted with its iconography. Seances and wild parties are rumored to have taken place in the house during its early years; later, later, during the 1960’s, the house was rented to the Monkees.  There used to be a salt lick for the deer who wandered through the property, and a woman who lived next door remembers petting them from her window.

But back to Clara Bow, possibly the most gifted actress in early film. Physically graceful and effortlessly comedic, she had no need for the mannerisms of silent film–exaggerated hand gestures, vamping and moony gazing. Her technique was  naturalistic and modern, so much so that she could give today’s actresses reason to worry. This clip not only proves it but shows why she was called the “It” Girl: http://www.youtube.com/watch?v=Dxo_99eaEEA&feature=related

Bow arrived in Hollywood in 1923 after beginning her movie career with rave reviews in “Down to the Sea in Ships” (1922).  Named a WAMPAS Baby Star, she an overnight sensation in silent comedies. Then in 1927 came the twin releases that would seal her reputation as an actress:  “Wings,” and “It.”

By the age of 22, Bow had the world at her feet–yet she was feared and rejected by her peers in Hollywood. Her impoverished, abusive upbringing proved impossible overcome; even by the louche standards of the movie industry, she was disreputable. Bow’s acting career was over by 1933, not so much because of the advent of talkies as her reputation for instability. Fortunately, her retirement had a reasonable excuse:  she was newly married to Rex Bell, the cowboy actor who would later become Lt. Governor of Nevada, and starting a family.

Like most actors of the time, Bow moved house a lot. During the 20’s, she lived in Whitley Heights and Laurel Canyon; later accounts place her in Beverly Hills and West Los Angeles. Oddly, I’ve found no written confirmation of her time in Beachwood Canyon, though it seems unlikely that anyone would refer to the Clara Bow House without reason. It makes sense that she would have wanted to live in a neighborhood favored by fellow actors such as Charlie Chaplin, Pola Negri, Douglas Fairbanks and Norma Talmage. But their evident disdain also might have prompted Bow to move on.

Dorothy Arzner was a pioneer director in several respects. Not only was she among the first female film directors of the Silent Era and the first woman to join the DGA; she was also the first woman director of a “talkie” and the inventor of the boom mic. She accomplished the former with “Manhattan Cocktail” in 1928. The following year, when Arzner was at the helm of  “The Wild Party,” starring Clara Bow and Frederic March, she accomplished the latter. 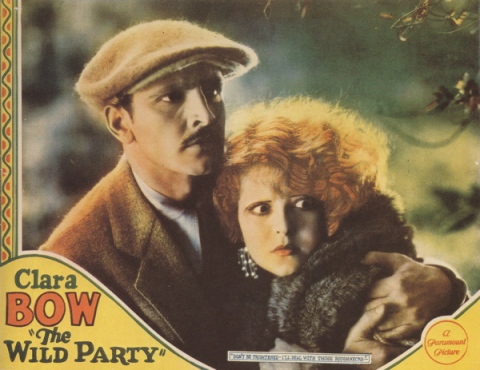 Although Clara Bow was only 24 when she made “The Wild Party,” she was a movie veteran with 50 films to her credit. She was also understandably nervous about speaking on film for the first time and unnerved by the microphone. With that in mind, Arzner attached the mic to a fishing pole, which allowed Bow her customary freedom of movement on the set. The boom mic, as it became known, revolutionized filming and has remained an essential piece of equipment in every movie made since.

Arzner, a no-nonsense, openly lesbian director who preferred men’s jackets and neckties to dresses, might have seemed an unlikely ally for an emotionally erratic sex symbol like Bow, the original “It” Girl. But Arzner held Bow in high esteem, calling her a natural actress and praising her electrifying on-screen presence. Significantly, the two had worked together previously, in “Get Your Man,” (1927), during which Bow, after some initial resistance, had come to respect Arzner as a director.

“The Wild Party” opened to mixed reviews but critics and audiences generally agreed that Clara Bow’s voice was good enough for talkies. The actress herself was horrified, however, by the sound of  her Brooklyn accent:

Although Dorothy Arzner reassured her, Clara was inconsolable. ‘How can I be in pictures with a voice like that?’ she wailed. Then she burst into tears.

Both their careers survived the advent of “talkies.” Arzner directed features until 1943, when a bout of pneumonia led her to take less stressful jobs–commercials and military training films. She lived until 1979, long enough to be feted as a film pioneer and honored by the DGA. Her personal life was successful as well: Arzner’s 40-year partnership with the choreographer Marian Morgan lasted until Morgan’s death in 1971.

Bow, whom Preferred Pictures chief B.P. Schulberg nicknamed “Crisis-a-Day Clara,” suffered a nervous breakdown in 1931. The following year she married cowboy actor Rex Bell and left acting for family life in 1933. She and Bell had two sons; still Bow remained emotionally fragile, attempting suicide during Bell’s run for Congress in 1944. Despite her myriad health problems, Bow and Bell remained married until his death in 1962. (Bell’s political career also endured; he was Lt. Governor of Nevada from 1955-1962.) Clara Bow returned to Los Angeles, living quietly under a nurse’s care. She died of a heart attack in 1965, at 60.

I am indebted to the following sources: “The Wild Party,” by Kendahl Cruver, “Manipulation vs. Minogomy: Clara and the Sexual Politics in ‘Get Your Man,'” by Jeffrey E. Ford, and Directed by Dorothy Arzner by Judith Mayne (Indiana University Press, 1994).

You are currently browsing entries tagged with ” Rex Bell at Under the Hollywood Sign.