Beachwood’s Earthly Paradise: The Lost Gardens of the Krotona Colony

The Italian Gardens/All Photos Copyright Krishnamurti Foundation of America, except where noted

The Theosophical Society’s Beachwood Canyon sojourn lasted less than 15 years, from late 1911 until 1926, but it produced a planned community of distinctive public buildings and houses, roughly two dozen of which survive. The Krotona Colony’s buildings can be identified by their eccentric architecture, which includes domed roofs, keyhole windows, arched doorways and art glass panels.

Upon closer examination, one can make out details such as the star of David, cross, swastika (an ancient Hindu symbol used also by Buddhists) and lotus, which connote the melange of religions contained in the Theosophical doctrine. 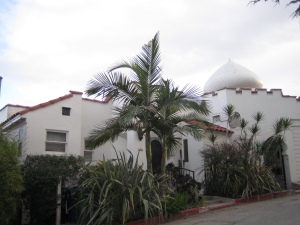 Gone forever are the lovely grounds of the Krotona Colony. As I wrote in my previous post, “The Agrarian Origins of Beachwood Canyon,” the Theosophists wanted to grow as much of their own food as possible, a desire reflected in the Colony’s fields and vegetable gardens. But–as the map shows–considerable attention and land were devoted to gardens whose purpose was recreational and contemplative. Chief among these was the Italian Gardens, located at the top of Temple Hill. Its formal layout was crowned by a magnificent Mogul-style pergola that provided members a place for reflection, as well as an impressive view of Hollywood to the south.

Map of the Krotona Colony

Hollywood’s burgeoning urbanism would drive the Theosophical Society to relocate to the Ojai Valley in 1926. The Krotona Colony’s public buildings were turned into apartments and private homes; its houses were sold to new, non-Theosophist owners. But the grounds, including the Italian Gardens, were subdivided into residential lots. Houses soon rose up, leaving no trace.
___________________
For more about the Krotona Colony, purchase the documentary “Under the Hollywood Sign” at http://hopeandersonproductions.com/?page_id=3361
The film is also available for rent at https://vimeo.com/ondemand/uths

You are currently browsing entries tagged with pergola at Under the Hollywood Sign.