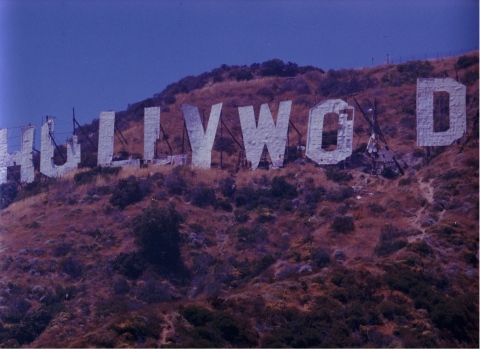 The Hollywood Sign As It Looked on August 7, 1978/Both Photos Courtesy Raiden Peterson

I’ve been immersed in a weeks-long repainting of my house’s interior, an ordeal I wouldn’t recommend if it weren’t necessary. Tomorrow the final phase begins: the repainting of the woodwork in my living room/office, so today I began the arduous process of clearing out all the cabinets. That’s when I found these two photos which were sent to me by Raiden Peterson, who I interviewed in 2007 my documentary Under the Hollywood Sign . (The documentary is available for sale on DVD at underthehollywoodsign.com and as a download for sale or rent from https://vimeo.com/ondemand/uths)

Raiden Peterson supervised the tear-down and reconstruction of the Hollywood Sign for Pacific Outdoor Electric, and documented his work throughout the process. The first photo was taken on August 7, 1978, the day before demolition began. The second was taken soon after the new Sign was completed on October 30, 1978. Thirty-six years later, many–perhaps the majority–of the visitors to the Hollywood Sign have no idea that the current Sign is not the original. These photos tell the story.

You are currently browsing entries tagged with Pacific Outsdoor Elelctric at Under the Hollywood Sign.