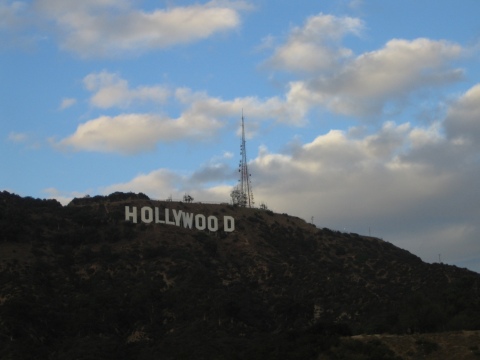 The Hollywood Sign and Clouds/Photo by Hope Anderson Productions

Two friends have alerted me to the mysterious illumination of the Hollywood Sign during the past couple of nights. Not that I noticed–once I’m home, I tend not to stare out the window at it. The fact that this “lighting” of the Sign–which in no way resembles the full-on light show of December 31, 1999–has aroused such enthusiasm should give pause to those who think it could be illuminated (sporadically or not) without inciting massive traffic jams into Beachwood Canyon. Here’s an article about it:

As I’ve mentioned in previous posts, the Hollywood Sign is often visible at night because its white paint reflects ambient light and moonlight. The recent paint job only increases the phenomenon, and those who live near the Sign report the nightly influx of noisy groups of partiers. Adding insult to injury, these visitors leave their bottles, cans, condoms and cigarette butts for residents to clean up.

The fact that people are smoking in a high-risk fire zone is disturbing, as a single spark can (and has) set the neighborhood ablaze. As for the bottles, cans and condoms, the least these revelers could do is to taken their trash with them. Another word about the condoms: not only is it illegal to have sex in public, but Hollywoodland’s wild animal patrol–raccoons and skunks, coyotes, bobcats and mountain lions–should give anyone pause.