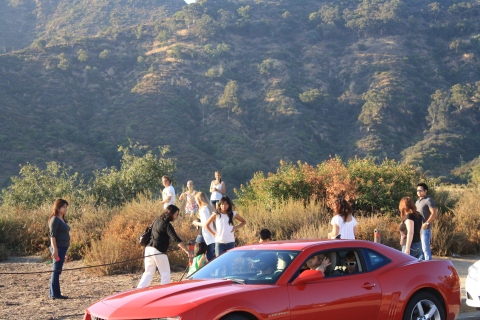 For months I’ve been on a self-imposed moratorium on writing about Hollywoodland’s ever-growing tourist problems, and for good reason. In addition to getting emails from people outside the neighborhood who were hellbent on seeing the Sign lit up at night despite ample evidence that it would cause mayhem, I was also hearing from neighbors who said you don’t speak for us, regardless of what I wrote.

Of course I don’t speak for them; I never said I did. My intent in starting Under the Hollywood Sign was to promote my writing and documentaries and to write about what interested me–namely film–and I was happy to return to it.

Although I plan to keep my vow, today I’m making an exception for the Hollywood Reporter’s article. Senior writer Gary Baum has done a masterful job in exploring the Hollywoodland’s predicament as an accidental, out-of-control tourist destination, presenting its history and present-day circumstances in a thoughtful and balanced way. As one of the many residents he interviewed, I can attest to his thoroughness and hard work. Here’s the link: http://www.hollywoodreporter.com/news/war-hollywood-sign-pits-wealthy-761385

You are currently browsing entries tagged with Gary Baum at Under the Hollywood Sign.