This Morning Near the Hollyridge Trailhead, A Truckload of Spilled Manure 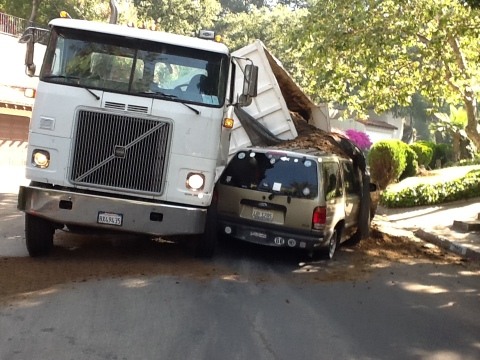 This morning a rig carrying a load of manure from Sunset Ranch overturned on North Beachwood Drive; fortunately, no one was buried by it. But on a normal Saturday, this might have been the outcome, as the street is always crowded with pedestrians headed toward the Hollyridge Trail.

The only reason pedestrians weren’t out in force today is that the Trail is closed due to the construction of a fence and gate. When completed, the gate will keep out cars (except for those going to the Ranch), but not pedestrians, despite the fact that they walk up in large groups, several abreast, on a street that lacks sidewalks, blocking cars and emergency vehicles.

In the interest of public safety, Hollywoodland residents have united in petitioning the City to close the Hollyridge Trailhead permanently, and the LAPD, LADOT and LAFD have concurred. Nevertheless, Rec and Parks Interim General Manager Mike Schull has ignored all recommendations and plans to reopen pedestrian access the Hollyridge Trail via Beachwood Drive as soon as the gate is completed. Councilman Tom LaBonge, after promising a 180-day closure of the trailhead for further study, has reneged on his promise and now agrees with Schull.

Although Hollywood residents like to hike the Trail as much as visitors do, we are willing to forgo our own access in the interest of safety–not only our own but that of visitors, whose treatment for injuries and heat stroke has been needlessly delayed by the gridlock on Beachwood Drive. Another pressing concern is the increased fire risk brought into the Canyon by thousands of visitors a day, many of whom smoke with impunity. As we face the driest summer in Los Angeles’ history, the chances of Hollywoodland going up in flames increase with each new day. On a gridlocked street with no alternate access, all it would take is a single spark.

The City’s Latest Assault on Hollywoodland: A Plan to Eliminate Half Our Street Parking 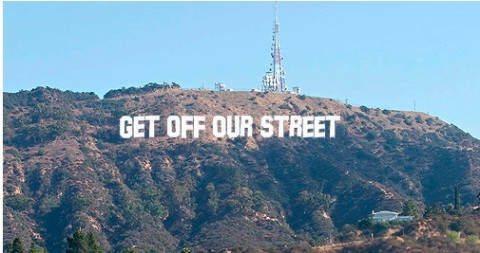 When I’m driving on Beachwood Drive, impeded by stopped tour vans and tourists posing for photos in the middle of the street, I sometimes wonder if Hollywoodland’s many visitors ever think about their impact on those of us who live here. I doubt it: if they did, matters wouldn’t have escalated into the crisis we now find ourselves mired in. A thousand visitors’ cars per day have caused gridlock, trapped us our houses and prevented us from getting home. There have been hostile arguments, car accidents and untended medical emergencies. And at the end of the day, we residents are left to clean up the detritus of our neighborhood’s wild, toll-free tourism: cigarettes and matches in a wildfire area; beer cans and liquor bottles, bottles of urine, bags of excrement and used condoms.

In any other place, a City Council Representative would represent his constituents’ interests, not those of tourists. Unfortunately, our representative is Tom LaBonge, whose determination to be Mr. Hollywood has pitted him against the very people who pay his salary–us. His latest salvo, harebrained even by the standards of his record, is to eliminate street parking on the east side of Beachwood Drive in Hollywoodland during the day, the better to accommodate throngs of tourists who hike to the Hollywood Sign.

Never mind that 100% of polled residents oppose the plan. LaBonge is determined to restrict the mile-long stretch between Beachwood Village and the northern end of Beachwood Drive, making it illegal to park outside our houses from 8am to 6pm, seven days a week. No word on where all the residents’ cars will go, to say nothing of moving trucks and service vehicles. I happen to live on the east side of Beachwood Drive and although I park in my one-car garage, I have friends, family and repair people who need a place to park when they visit. Where are they supposed to go when the west side of the street will be filled with residents’ cars? I guess we’ll find out; there’s a meeting on the matter at City Hall this Wednesday. For those wishing to attend, the details are:

Correction: Originally the article stated that parking on Beachwood would be restricted 24 hours a day, seven days a week. I regret that I was misinformed and have made the necessary corrections.

You are currently browsing entries tagged with City Councilman Tom LaBonge at Under the Hollywood Sign.