Alfred Hitchcock’s “The White Shadow”: A Chronicle of Genius Foretold Courtesy The Academy of Motion Picture Arts and Sciences

Last Thursday night’s long-awaited AMPAS screening of the previously lost and newly restored “The White Shadow” (1924) surpassed my expectations, which were very high. Though incomplete–only three of its reels were recovered–the film is impressive, so much so that it is still running in my head, days later.  Any serious filmgoer should jump at the chance to see it.

The earliest surviving film work of Alfred Hitchcock, who is credited as writer, editor and assistant director, “The White Shadow” provides ample evidence of an already sophisticated visual style. (Though Graham Cutts is the credited director, Hitchcock’s contribution is thought to have been far greater than his. Speaking of their five films together, Hitchcock said that he was  “running even the director.”) The fact that Hitchcock was only 24 years old at the time speaks volumes about his talent.

In an era where films were often shot on the fly, “The White Shadow” appears to have been carefully storyboarded. Shots are framed and lit beautifully, and actors are positioned in a manner more painterly than haphazard. My favorites include Betty Compson (excellent as twins, one good and one bad) playing poker, her eleborate hat wreathed in cigarette smoke, and the shot that introduces The Cat Who Laughs, the nightclub where she plays. Instead of opening with a shot of the club, Hitchcock shoots its logo, a cat’s face medallion on the grillwork of an interior balcony. In the background, we glimpse the stockinged legs of  the club’s female patrons–a sight that conveys more information than any conventional establishing shot. 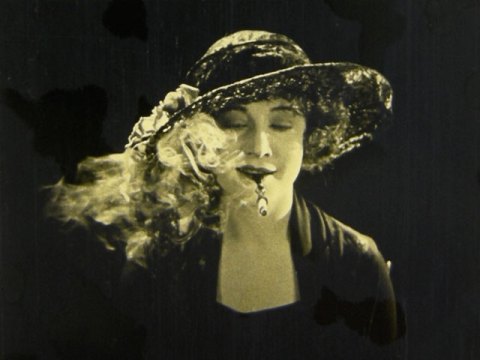 In making the most of  a beautiful country estate and a Parisian nightclub, Hitchcock provides a fascinating preview of later films like “The Man Who Knew Too Much,” “North by Northwest,” and “Vertigo,” whose locations were of the utmost importance. Unlike many silent films, which seem set-bound, “The White Shadow” makes good use of the outdoors. Part of the missing section was shot in Switzerland, and would have been fascinating to see.

The audience at the screening was captivated, not only by the film but by the excellent musical accompaniment, composed by Michael Mortilla and performed by him and Nicole Garcia. So wrapped up were we that its abrupt ending, at a particularly dramatic juncture, was met with a collective groan–and huge regret that the rest of the film would never be seen (though it was described–by Eva Marie Saint, no less). Still, “The White Shadow” is amazing. See it if you have the chance. Early Films, Now Restored, to Have New Premieres at AMPAS This Month 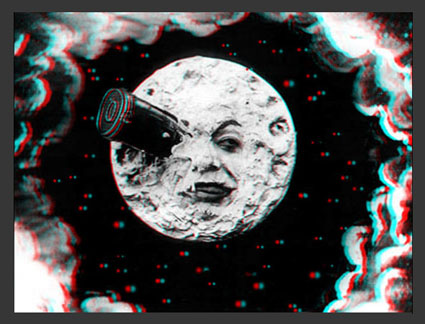 From "A Trip to the Moon," by Georges Meliese

Several early films (including some from from the New Zealand Film Archive), freshly restored, will reach new audiences with special showings at the Academy this month.

On Tuesday, September 6th at 7:30pm, comes “A Trip to the Moon,” (1902), Georges Meliese’s hand-colored fantasy film. After a complete restoration at Technicolor in Los Angeles, a new soundtrack was composed for the film by Air, the French band. The film’s restoration was sponsored by Lobster Films, the Groupama Gan Froundation for Cinema and the Technicolor  Foundation for  Cinema Heritage. Also on the bill are “A Trip Down Market Street,” (1906) which depicts San Francisco just days before the earthquake and fire that destroyed the city, early 3D versions of Melies films and turn-of-the-century sound films.  For tickets ($5 general admission, $3 Academy members/students, go to www.oscars.org)

On Thursday, Sept. 22 at 7:30pm, the Academy will screen Alfred Hitchcock’s “The White Shadow,” whose restoration was sponsored by the Academy Film Archive, George Eastman House, the Library of Congress, the Museum of Modern Art, and UCLA Film and Television Archive. Also on the bill are “Won in the Closet” (1914), Mabel Normand’s dirctorial debut, and “Oil’s Well” (1923), a Monty Banks comedy. For tickets ($5 general admission, $3 Academy members/students, go to www.oscars.org)

The New Zealand Film Archive’s treasure trove of Silent and early Talkie films has yielded yet another happy surprise: three reels of the earliest surviving feature crediting Alfred Hitchcock. “The White Shadow,” (1924) stars Betty Compson in a dual role as twin sisters, one good and the other bad. The 24-year-old Hitchcock served as the film’s production designer as well as its writer, editor and assistant director. 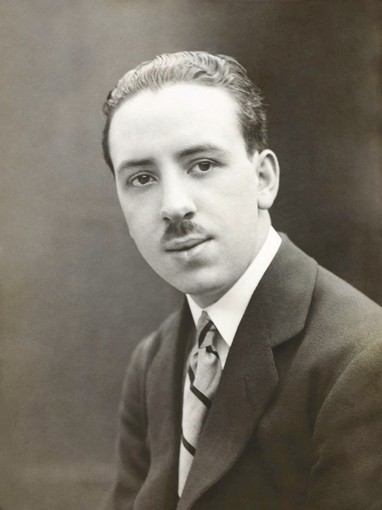 Alfred Hitchcock in his Twenties

Hitchcock, who shot his films so economically they were said to be pre-edited, learned his craft in the English studio system, beginning as an apprentice in 1920, when he was 21. Working his way up the ladder at Islington Studios, he learned every aspect of filmmaking, from menial to technical, and was a skilled filmmaker by the time “The White Shadow” was made. (Contrast his apprenticeship with the path of today’s film students, who are channeled into directing, cinematography and screenwriting programs, with predictably narrow results.)

By the time he directed “The Lodger,” (1927), Hitchcock was, at 28, a filmmaking veteran–and his work showed it. A steady stream of hits, including “The Man Who Knew Too Much” (1934), “The 39 Steps” (1935), and “The Lady Vanishes” (1938), established him as a star writer/director. From there, the leap to Hollywood was inevitable: he and his wife, Alma Reville (a film editor who was her husband’s greatest collaborator), moved to Los Angeles in 1939. Hitchcock’s first American film, “Rebecca” (1940), was not only an instant classic, but the first in a line of critical and financial successes that stretched into the 1970s.

As for “The White Shadow,” it has been restored in New Zealand with the help of the [American] National Film Preservation Foundation. A new master and exhibition print will be sent to the United States, and a “re-premiere” screening will be announced later this week. For more information, please go to www.filmpreservation.org

You are currently browsing entries tagged with Alfred Hitchcock at Under the Hollywood Sign.