“Echo in the Canyon”: A Flawed, Fascinating Documentary about the California Sound 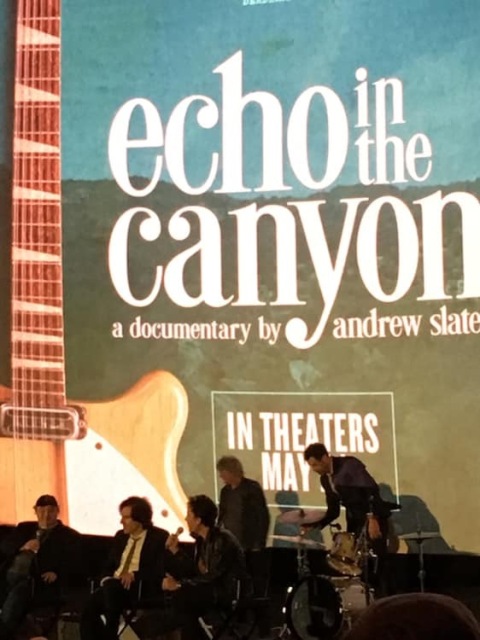 Though Laurel Canyon has been home to musicians for more than a century, its musical reputation peaked in the mid-to late-1960’s, when the Byrds, The Mamas and the Papas, Frank Zappa, Carol King, Buffalo Springfield, Canned Heat, John Mayal, Neil Young and The Doors all lived there. The Canyon gave these musicians the perfect atmosphere for collaboration and creative ferment: close proximity to one another, a casual drop-in policy and sanctuary from urban distractions. The resulting songs have become classics.

Andrew Slater’s new documentary “Echo in the Canyon” is a chronicle of that heady time that features, among others, Roger McGuinn, David Crosby, Brian Wilson and Michelle Phillips. But the heart of the project is Jakob Dylan, who skillfully conducts the interviews, plays versions of the songs with his excellent band and, according to the Q&A after the screening, secured the licensing of songs that otherwise would have been prohibitively expensive, if not unavailable. Born in 1969, Dylan is not only the bridge between older and younger musicians but rock-and-royal royalty and a true heir to the California sound. Perceptive and humble throughout, he also provides the biggest laugh of the film. When David Crosby recounts, “Dylan was there,” Jakob says, “You have to be more specific.” Crosby smiles. “Bob was there,” he says, instead of the obvious “Your dad.”

Even for those familiar with the musicians and their work, “Echo in the Canyon” offers some surprises. I learned that the Byrds were the center of everything, influencing, and being influenced by, Eric Clapton and the Beatles, among many others. According to Ringo Starr, the Byrds were the Beatles’ favorite band, and Roger McGuinn confirms that the Beatles were the Byrds’. Seeing Brian Wilson, Eric Clapton and Steven Stills laying down tracks for new versions of their songs was another highlight. And Michelle Phillips’ delight at the new version of “Go Where You Wanna Go,” was heartwarming, much as I would have preferred her to sing it.

But “Echo in the Canyon” has notable problems. The structure is haphazard, and interviews are juxtaposed with long shots of Jakob Dylan driving around Hollywood and the Sunset Strip, cut with mysterious footage of a young man walking the same streets in the late-1960’s. Though the source of the archival footage isn’t revealed until later in the documentary, it’s “Model Shop,”a 1969 film by Jacques Demy starring Gary Lockwood and Anouk Aimee. In The New Yorker, Richard Brody describes the film:

…George follows [Lola’s] car throughout the city—and Demy daringly films that pursuit, and a wide range of George’s other jaunts by auto through Los Angeles, in the cinematic interest of showing not George but L.A. The movie is a virtual documentary about the city, a visual love poem to Demy’s new world.

While nostalgic, “Model Shop” has nothing to do with the music of its era, and its inclusion is merely atmospheric padding. Another drawback is some of Dylan’s choices of singers. Fiona Apple, Regina Specktor and Cat Power lack the style–and in the case of Power, the range–to sing these songs well. Beck is ill at ease singing harmonies, though he rallies on the solos. Apart from Jakob Dylan, a superb cover artist, only Jade Castrinos, who delivers the soaring high notes of “Go Where You Wanna Go,” succeeds in capturing the California Sound.

Then there are the film’s omissions. Jim Morrison, the most notorious Laurel Canyon denizen, goes entirely unmentioned, along with the rest of The Doors. While it’s true that The Doors’ music didn’t influence that of their musical neighbors, their absence is striking. A far more egregious omission is Joni Mitchell, who not only lived in Laurel Canyon during its heyday but is the only one of its musicians whose stature is still growing. (Among the myriad artists who’ve cited her influence on their music are Elvis Costello and Prince.) Yet Mitchell isn’t mentioned even by her ex-partner Graham Nash, a less important musician who contributes one of “Echo”‘s least interesting interviews. The fact that Nash’s most famous song, “Our House,” memorializes his and Mitchell’s domestic life in Laurel Canyon only makes matters worse.

After the screening and the Q & A, Jakob Dylan and his band, including Jade Castrinos, put on an excellent performance of songs from the film. (The soundtrack of the same name was released concurrently.) But the real surprise was the appearance of Steven Stills and Roger McGuinn, who performed with gusto. As Stills launched into a smoking rendition of “Questions,” my jaw hit the floor; I never would have expected to see him live, let alone for free. Unfortunately, my fellow Angelenos were less impressed: a sizeable number left  before and during the concert, apparently too jaded to appreciate such a rare gift.

§ 3 Responses to “Echo in the Canyon”: A Flawed, Fascinating Documentary about the California Sound

You are currently reading “Echo in the Canyon”: A Flawed, Fascinating Documentary about the California Sound at Under the Hollywood Sign.