“The Other Side of the Wind”: Orson Welles’s Last Film, Seen on a Big Screen 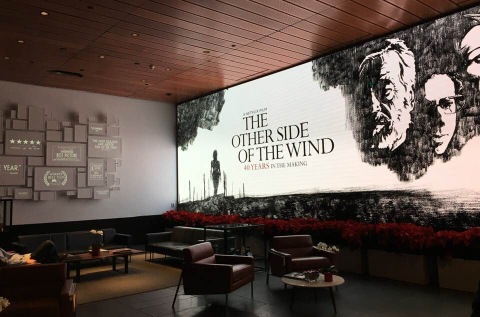 “The Other Side of the Wind” at Netflix/Hope Anderson Productions

Recently I was invited to see “The Other Side of the Wind,” the long-awaited final film from Orson Welles. Though it’s streaming on Netflix, I was eager to see it as Welles had intended, and where better than at Netflix’s beautiful headquarters in Hollywood?

Netflix’s pride in “The Other Side of the Wind,” was clear from the moment I set foot in the lobby, which is dominated by a giant lighted screen of its poster (as well as a wall dedicated to the season’s other prestige project, “Roma”). If someone had told me a year ago that two of the most anticipated movies of 2018 would be black-and-white art films, I wouldn’t have believed it, but it’s true.

Those who bemoan Netflix’s growing clout in movie production should try to imagine any of the old-line Hollywood studios backing a largely unedited forty-year-old experimental film shot on different film stocks in both black-and-white and color. Oh, and with faulty and at times nonexistent sound. None of them would have touched the hundred hours of raw footage with a barge pole, let alone sunk millions of dollars into fashioning it into a film. That project–which took a comparatively fast two years–is detailed in a companion documentary, “A Final Cut for Orson: 40 Years in the Making.” I found as fascinating as the movie itself, and recommend seeing it beforehand. 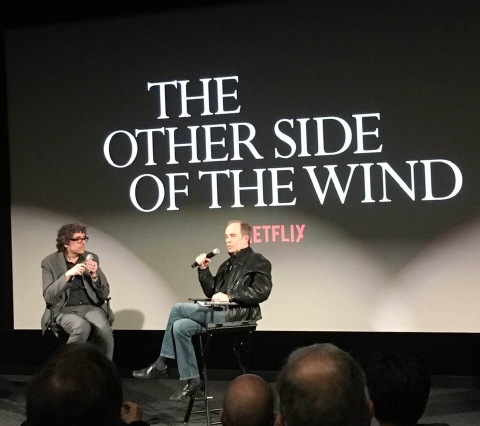 “The Other Side of the Wind” was described by Welles as a painting with a frame around it. The painting is the film directed by the central character, Jake Hannaford (John Huston), while the frame is Hannaford’s 70th birthday party, attended by his cast, crew and a group of journalists who attempt to interview Hannaford while filming the goings-on. The cast includes many filmmakers. Some, like Claud Chabrol and Paul Mazursky, play themselves; others, like John Huston and Peter Bogdanovich, have leading roles. The film-within-a-film is silent and plotless but beautifully shot in 35mm Technicolor by Gary Graver, Welles’s DP during the 1970’s, who didn’t live to see his best work on the screen. Jake’s story  is shot in black-and-white, and the juxtaposition makes “The Other Side of the Wind” seem as if it’s set in different eras. While Jake’s project is an Antonioni-like art film, Jake’s party is vintage Welles: conversations about mortality and sexuality, crowded rooms, shots fired, and–at the end–a death.

Welles was fifty-five when he started filming “The Other Side of the Wind,” but it’s a young man’s movie: messy, brash and uneven. For every gorgeous moment there’s one that doesn’t work, but this inconsistency gives the film a certain charm. I was thrilled to see John Huston on the screen again; I’d forgotten what a great actor he was. But the film’s biggest revelation is  Welles himself,  a director so ahead of his time that he needed technology that didn’t exist to finish his film. If he were alive today, Orson Welles would find Netflix the perfect home for his imagination and ambitions.

“At Eternity’s Gate”: Van Gogh Through a Painter’s Eyes 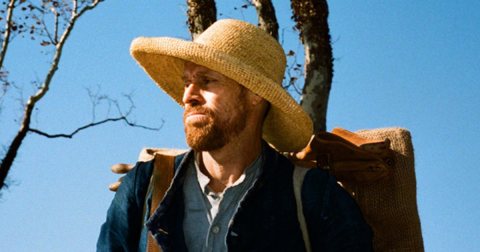 Willem Dafoe in “At Eternity’s Gate”

Has any painter been the subject of more films than Vincent Van Gogh? Since “Lust for Life” started things off in 1956, we’ve seen “Vincent and Theo,” (1990), “Van Gogh” (1991) and “Loving Vincent” (2017), as well as various documentaries. On the heels of those films, it might seem that Julian Schnabel’s “At Eternity’s Gate” would have little to add. After all, aren’t the facts of Van Gogh’s final years in Arles and Auvers well known?

Yes and no. All the well-known highs and lows of the previous films are presented. Van Gogh’s incredible productivity in Arles–187 paintings in fifteen months, a rate of 2 1/2 per day–was all the more remarkable given how sick he was, both physically and mentally. We see his relationships with his brother, Theo; his friendship with Gauguin; his poverty; his hospital stints; his severed ear; and later, in Auvers, his death at 37.

What’s new is the inclusion of two recent findings. The first is the theory (put forth in the 2011 biography Van Gogh: A Life that Van Gogh’s shooting was not a suicide but the work, accidental or not, of a local gun-toting teenager. Given the oblique angle of the bullet entry, Van Gogh’s lack of access to firearms and the fact that people who shoot themselves don’t opt for the abdomen, it’s amazing that suicide was the accepted cause of death for over a century, and Schnabel’s film puts a convincing end to it. The second new element is a large collection of drawings Van Gogh supposed did in a blank book given to him by his Arles landlady, Mme. Ginoux. According to the film, the book went undiscovered until 2016, a fantastic development that Schnabel accepts as fact. Nevertheless, the Van Gogh Museum and many scholars think the drawings are fake.

Apart from these biographical additions, “At Eternity’s Gate” sets itself apart by showing Van Gogh’s subjects through his eyes–or at least Schnabel’s. He shows the sunflowers, olive groves, haystacks and limestone cliffs of Arles as Van Gogh saw them, rather than thickly painted abstractions. In the best scene, we see Schnabel’s hand painting Van Gogh’s boots, rapidly transforming a series of jagged lines into a masterpiece. Though Van Gogh was a contemporary of the Impressionists, Schnabel makes clear that he was never one of them. Instead, he seems to have been the world’s first action painter. As Van Gogh puts it, “Maybe I’m a painter for people who haven’t been born yet.”

“At Eternity’s Gate” has its downside. The fact that Willem Dafoe, now 63, is far too old for the role is a problem, as is Schnabel’s annoying use of blurred shots, off-kilter angles, double images and repeated dialog to underscore the painter’s deteriorating mental state. But the scenes of Van Gogh roaming through fields and climbing cliffs in search of subject matter are as beautiful and indelible as the paintings themselves, and reason enough to see the film.

You are currently viewing the archives for December, 2018 at Under the Hollywood Sign.