“Blaze”: A Brilliant Biopic That Redefines the Genre 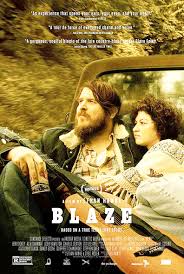 If biographical films all seem alike, it’s because they all suffer from the same problem: their famous subjects’ familiarity, which constrains the creativity of writers, directors and actors in equal measure. But because the country singer-songwriter Blaze Foley wasn’t famous during his brief life, “Blaze” escapes that burden. The result is glorious: a captivating exploration of life, love and art that explodes every tired biopic cliché.

Until I saw the movie a week ago I–like most people, I suspect–knew Blaze Foley’s name only because of  his song, “If I Could Only Fly,” as covered by Willie Nelson and Merle Haggard, and “Drunken Angel,” Lucinda Williams’s song about Foley. Perhaps because of this, Ben Dickey could choose to portray Foley’s spirit instead of merely impersonating him. It’s a beautifully nuanced and relaxed performance, and the fact that it’s Dickey’s first acting role makes it all the more astonishing. Equally impressive is the musician Charlie Sexton as Townes Van Zandt, Foley’s best friend. Sexton imbues Van Zandt with the quiet gravity of a man prepared to sacrifice everything for art, and performs his song “Marie” uncannily. The film’s other major character, Sybil Rosen, Foley’s partner during the seventies and the co-writer of the screenplay, is played by the actress Alia Shawkat in a graceful and understated manner that belies a background in comedy.

The director Ethan Hawke deserves praise not only for the performances but the fascinating structure of the film, which hops nimbly back and forth in time and tells Foley’s story in different ways and from different perspectives. Instead of the usual you-are-there-watching approach, Hawke recreates the events leading up to the shooting in detail, and then portrays the crime in fragments, including Van Zandt’s recollections and Rosen’s visit to the scene afterwards. When Hawke shoots Foley’s meandering, drunken performances, he allows Dickey to play entire songs while the camera wanders leisurely through the room, following anonymous bar employees as they serve drinks, clean up broken glass and go outside to smoke. Everything is so unforced that the film seems almost plotless, except that it’s not. All the threads of the story lead inexorably to premature death, both depicted and foreshadowed. Foley’s came in 1989 and Van Zandt’s in 1997, of heart failure caused by alcoholism and heroin addiction.

Long before Foley’s life ends, Sybil Rosen leaves him to his alcoholic self-destruction, but “Blaze” is not as sad as you might think. Rosen saves herself and becomes the artist she’s meant to be, while Foley courts death, achieves it, and gains posthumous fame.  As Van Zandt says, “If you wanna to write a song, everyone’s gonna tell you you gotta live that song. But that’s not it: you’re going to have to die–a little.”

Ethan Hawke understands this, and now we do too. “Blaze” is not only the best film I’ve seen about a musician; it might also be the best biopic, and an indelible achievement in filmmaking. Future directors of the genre will have Hawke’s formidable example to live up to, and I look forward to seeing what they take from it.

You are currently reading “Blaze”: A Brilliant Biopic That Redefines the Genre at Under the Hollywood Sign.