Today would have been Jonathan Gold’s 58th birthday, which I’m sure he would have celebrated with a fabulous meal at one of the countless restaurants he championed during his years as the food critic for the LA Weekly and the LA Times. His unexpected death from cancer two weeks ago was a shock that Angelenos are still absorbing; whether or not we knew him personally, Gold was a familiar presence in our lives. In luring us to hidden gastronomic gems all over Los Angeles County, he gave us a taste of adventure that was as thrilling as the food.

Having listened faithfully to his “Good Food on the Road” segment on KCRW for years, I wonder who will tell me where to eat—and more importantly, where not to eat—in the future. Whoever it is, I wish him/her good luck in succeeding the first and only food critic to win a Pulitzer. Also, ixnay on using the second person in reviews, which was Gold’s trademark.

Two years ago, he was the subject of a very good documentary, “City of Gold.” I wrote about it (along with “Knight of Cups”), and recommend it highly:

Two Cinematic Tours of Los Angeles: “Knight of Cups” and “City of Gold” 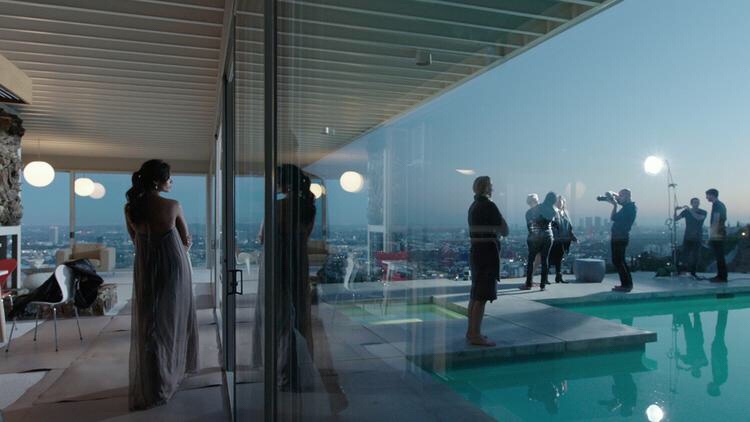 At the Stahl House in “Knight of Cups”

Since the early 20th century, Los Angeles has been the city that outsiders have loved to hate, usually based on fleeting touristic impressions. But no matter what the haters say, indignant reactions from the home crowd are few and far between. There are two reasons for this: 1) Angelenos don’t care what outsiders think of Los Angeles. 2) The last thing Angelenos want for people to move here, so all deterrents are welcome.

In L.A.-bashing, as in most matters, context is crucial. When Woody Allen wrote that L.A.’s “only cultural advantage is being able to make a right turn on a red light,” he was a non-driving visitor to Beverly Hills and the Sunset Strip. How could he know about either local culture or driving? And when David Bowie said, “The fucking place should be wiped off the face of the Earth,” he was referring to his near-fatal cocaine abuse in Los Angeles. (Never mind that his addiction began years earlier, in London.) Ironically, Bowie spent a fair amount of time in Los Angeles over the course of his long career, making movies, collecting awards, appearing on talk shows and recording one of his best albums, “Station to Station,” in Hollywood. Yet he clung to the opinions he formed while high in the back of limos and darkened hotel rooms.

I was thinking about all of this as I watched the new Terrence Malick film, “Knight of Cups.” The plot, such as it is, concerns Rick (Christian Bale), an improbably attractive screenwriter who meanders around Los Angeles (with side trips to Death Valley and Las Vegas), his mind veering back and forth in time. Rick covers a lot of miles, yet he never writes a word. In fact, the closest he comes to working is meeting up with his agents, twice at CAA (Century City) and once at (I think) the Warner Bros. back lot (Burbank). But who has time for writing when there are so many women to recall? Apart from Cate Blanchett and Natalie Portman, most of Rick’s paramours are young models who wear filmy dresses (or less) and extremely high heels. (FYI, Terrence Malick: real L.A. women favor pants and shoes they can walk in.)

Fortunately, the places in the movie are decidedly real. Even the most over-the-top party (hosted by Antonio Banderas, though for me the highlight was the appearance of Joe Lo Truglio) takes place in well-known location: a massive Versailles-like mansion in Beverly Hills. Rick goes downtown (Broadway, the Bonaventure, etc), to the beach (constantly), to LACMA (Mid-Wilshire) and the Huntington Gardens (San Marino). He lives in a well-known industrial-looking apartment (the Gallery Lofts in Marina Del Rey), although I’m pretty sure that no one has seen a naked woman in six-inch heels talking on the phone on the balcony. Among the many visual highs are a twilight photo shoot at the Stahl House (Pierre Koenig’s Case Study House #22), gorgeous shots of Venice and PCH, and footage of the L.A. River and the tracks at Union Station. In short, it’s a film is by Emanuel Lubeski, with tiny amounts of dialogue and large amounts of voiceover written by Malick.

As the film washed over me, I was surprised at how many of the locations I had visited, not only architectural gems like the Broadway Theaters, the Stahl House and the Annenberg Beach House but a street in Hancock Park three blocks from where I used to live. For outsiders, “Knight of Cups” is a dream-like look at a great swath of Los Angeles–at least the rich, white, show biz side of it. But for those of us who live here, it’s much more: a trippy, deluxe home movie shot by three-time Oscar-winning cinematographer.

Coincidentally, I saw “Knight of Cups” on the same weekend as “City of Gold,” the new documentary about the Pulitzer Prize-winning food critic Jonathan Gold. Like the Malick film, “City of Gold” provides a beautiful, in-depth tour of Los Angeles, though a less rarefied one–e.g., no naked women in towering designer shoes and many ordinary people, all of whom have jobs. Gold is a native Angeleno whose knowledge of L.A. is profound and inclusive. Intrepid and expert in most of the world’s cuisines, he takes us to a wide variety of notable restaurants, two of which happen to be food trucks. The wonderful street scenes in “City of Gold” show the real Los Angeles: a multi-racial, multi-cultural vibrant megacity. The documentary also contains this truth: Los Angeles is beyond the grasp of those who, in Gold’s words, “come for a couple of weeks, stay in a hotel in Beverly Hills, take in what they can get to within ten minutes in their rented car and [then] explain to you what Los Angeles is.” 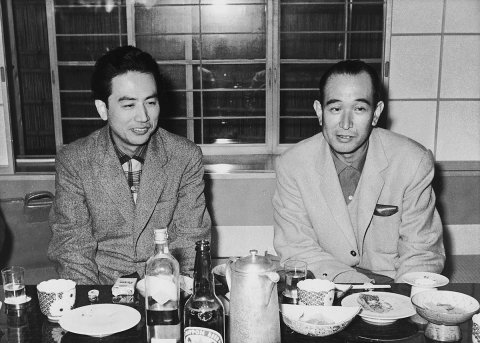 Shinobu Hashimoto and Akira Kurosawa in the 1950’s

Few centenarians’ deaths come as a shock, but last Thursday’s announcement of Shinobu Hashimoto’s passing at 100 marked the end of an era. Hashimoto, whose blazing career with Akira Kurosawa began with “Rashomon” and continued through the decades with such classics as “Ikiru,” “Seven Samurai,” “Throne of Blood,” “The Bad Sleep Well,” and “Dodes’Ka-Den,” was a giant of cinema, and not just in Japan. His screenplays, whether written alone or in collaboration, have resonated throughout the world since 1950, their relevance unfaded by time and trends. 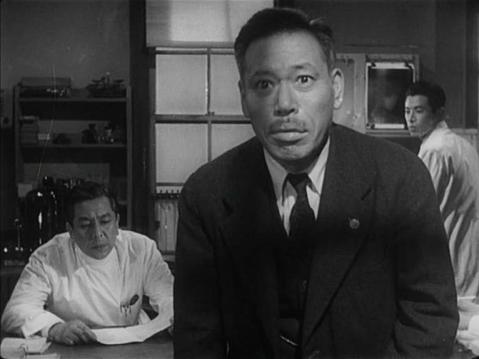 Though deservedly famous for the samurai films that brought fame to Kurosawa and Toshiro Mifune, his most important leading man, Hashimoto was equally renown for his contemporary films. Poverty, wartime devastation and existential dread were his themes, and he explored them with compassion and an unsparing eye for everyday cruelty. In “Ikiru,” my favorite film of all time (if I had to choose just one), Watanabe, the dying bureaucrat, not only finds life’s meaning in his remaining two months but does so in secret because his doctor has withheld his fatal diagnosis, as was the Japanese custom until recently. Watanabe’s only son treats him with disdain and his daughter-in-law regards him as a nuisance; neither will listen as he tries to break the news of his impending death. So Hashimoto, after granting the abstemious Watanabe a brief period of hedonism, sets him on a path to greatness: creating a park from an urban swampland, against almost insurmountable odds.

In “I Live in Fear,” Nakajima, a foundry owner, is so convinced of a coming nuclear war that he decides to move his family to the safe haven of Brazil. His family responds by having him declared incompetent. “Dodes’kad-den,” explores the daily lives of impoverished shantytown residents, including a boy who lives in a fantasy world in which he imagines himself a tram conductor.

Beyond his work with Kurosawa, Hashimoto wrote for other major directors of his time. His screenplays for “Summer Clouds” and “Whistle in My Heart” became two of Mikio Naruse’s best late-period films. “Harakiri,” for Masaki Kobayashi, is considered a masterpiece.

Still, it’s not necessary to have seen any of these films to know Hashimoto’s work well. “Seven Samurai” became “The Magnificent Seven;” “Ikiru” spawned “Breaking Bad;” “Hidden Fortress” inspired “Star Wars.” And even the least cinematically inclined are familiar with “Rashomon,” which has entered the English language as a word for conflicting yet true accounts. It’s hard to imagine life without these touchstones, all of which sprang from the pen of Shinobu Hashimoto, who survived World War II and tuberculosis to forge an unparalleled and unforgettable body of work. 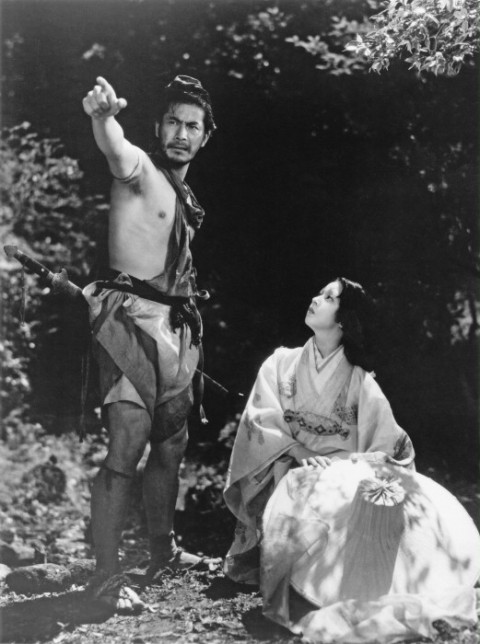 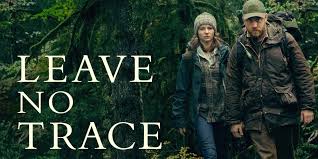 For years I watched several movies a week in theaters and more at home; hundreds per year. These days I rarely set foot in theaters, and the last film I saw in one was a documentary. As for features, what little isn’t of the superhero/action variety is usually unsatisfying, and often forgotten by the time I get home.

Further complicating matters are the increasingly compelling original series on streaming services. Nothing I’ve seen in this year has interested me as much as “The Handmaid’s Tale” and “The Crown,” so why make the trip to ArcLight? Fortunately, some relief has arrived via Deborah Graynik’s new film, “Leave No Trace.” Will, a war veteran with PTSD (Ben Foster) hides from civilization in the woods outside Portland with his teenage daughter Tom (Thomasin McKenzie). Father and daughter live harmoniously in primitive conditions until their inevitable discovery by park rangers. Though their re-entry into society yields mixed results, there are no villains or platitudes in “Leave No Trace,” and no violence. Social workers are sensitive and kind, as are Will and Tom’s new neighbors, but Will’s problems have no easy solutions.

Foster and McKenzie are brilliant actors, though it pains me that American characters in this quintessentially American movie are played by an Australian and a New Zealander. Aside from that, I can find no fault with “Leave No Trace.” The film is visually beautiful, as would be expected from its Pacific Northwest setting, but more crucially it captures the passage of time as only film can do. For anyone who longs for movies about humans rather than superheroes, this one’s for you.

You are currently viewing the archives for July, 2018 at Under the Hollywood Sign.