Poinsettias of Old Hollywood, Part I 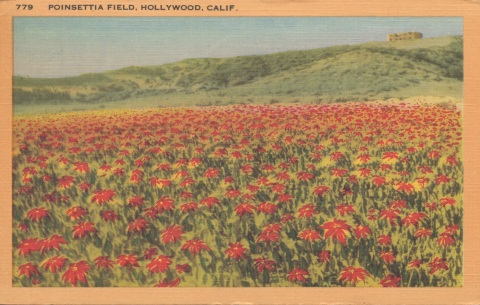 I was surprised to find this vintage postcard in the collection of Tommy Dangcil because I had not previously heard of poinsettias being grown in Hollywood. Judging from the single building in the hills, the image dates back more than a century, to when Hollywood still had large agricultural tracts. Most were planted with lemons and oranges, crops that would soon give way to movie studios and other commercial properties.

What makes the postcard even more striking is the fact that the poinsettia was not well-known at the time, and less a commercial crop than a curiosity. Native to Mexico, the plant–despite its red color–was not even particularly identified with Christmas. Its popularization was largely the work of Paul Ecke, a San Diego County grower who not only tirelessly promoted the poinsettia as the Christmas “flower” (in fact, the red parts are leaf-like bracts, while the yellow centers are the flowers) but who, with his son Paul Jr., created the white, pink, yellow and variegated types that are available today. Because of Ecke, Encinitas has long been the undisputed capital of poinsettia cultivation, producing 80% of the world’s plants. In light of its long history in Encinitas, discovering the poinsettia’s early connection to Hollywood was an unexpected pleasure.

After I posted my last piece, I discovered an article in the current issue of Discover Hollywood * that completes the poinsettia’s history in Hollywood. It seems that it was none other than Paul Ecke’s father, Albert, who started growing the plants in here in 1900. Like many Angelenos of the era, Ecke was headed somewhere else–in his case, Fiji–when he discovered Hollywood’s ideal year-round growing conditions and decided to stay. He settled his family on Hayworth Avenue and soon established an orchard and a dairy.

Noticing that poinsettias grew wild in Hollywood and bloomed at Christmastime, Albert Ecke cultivated them in the field on Sunset Boulevard shown in the postcard above. Father and son sold them in pots from roadside stands in Hollywood and later Beverly Hills, where winter visitors as well as locals bought them. The painter Paul DeLongpre painted them (one of his watercolors is featured in the article) adding to their popularity beyond Southern California.

As many have noted, the poinsettia is memorialized as a street name in Hollywood. Now we know why.

*The issue is available free of charge now, but isn’t up yet on the magazine’s website http://www.discoverhollywood.com
Presumably it will be soon.

Holiday Gifts from Under the Hollywood Sign: DVDs, Downloads and eBooks 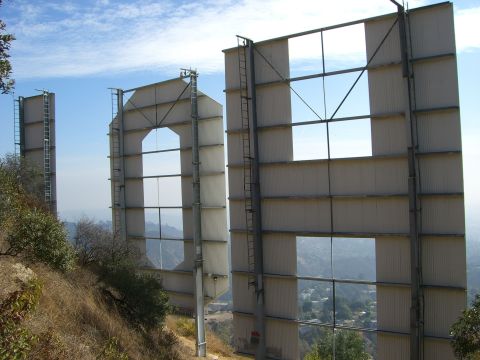 Back of the Hollywood Sign/Hope Anderson Productions

In 2009 I started this blog to promote my work as a documentary filmmaker and writer, the fruits of which are available as downloads and/or DVDs. If you’ve enjoyed my blog, please support the work that inspired it.

DVDs can be shipped overseas as well as domestically. Orders of two DVDs will be shipped at the price of one; though the option doesn’t appear on the site, I refund the second DVD’s shipping cost when payment is received. Please order soon to have them arrive in time for the holidays.

PEG ENTWISTLE: THE LIFE AND DEATH OF AN ACTRESS http://www.hopeandersonproductions.com/dvds/ 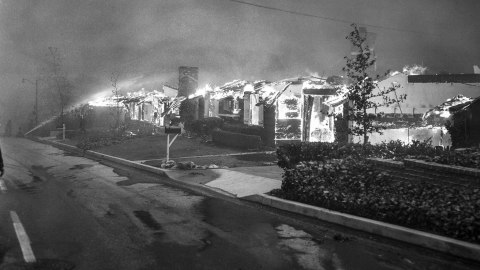 Waking to the news that the Sepulveda Pass was burning yesterday, I immediately thought of the last major wildfire to hit the area. On November 5th, 1961, the Bel Air Fire raced through the Hollywood Hills, burning 16,000 acres and destroying 484 houses. Though there were no fatalities, it was the largest fire to strike the City of Los Angeles, unrivaled until the current one began late Tuesday night.

The Bel Air and Skirball Fires began in similar conditions: fires from ignited brush were spread by Santa Ana winds at the end of an unusually long dry season. Without measurable precipitation or humidity, both catastrophes progressed quickly, flames racing from canyon to canyon along the ridge line of the Santa Monica mountains.

In Beachwood Canyon, the 1961 fire claimed 17 houses, including that of the writer Aldous Huxley and his wife Laura. When I interviewed Laura Archera Huxley in 2007, she vividly remembered being mesmerized by the flames near their house on Deronda Drive. Unable to grasp the urgency of the situation, she and Aldous waited too long to evacuate and lost nearly all their possessions as well as their home.

The Skirball Fire is being blown west instead of east, so Beachwood Canyon isn’t in danger from it. But bone dry conditions combined with tourists who smoke with impunity near the Hollywood Sign puts those of us who live here in constant jeopardy. When I learned that firefighters from our area were being deployed to fight the Skirball Fire, I started packing my bags.

Twenty-four hours later, the situation seems to be improving. But until this winter’s rains begin, fire danger remains, as does our fear. Visitors who ignore Beachwood Canyon’s No Smoking signs should know that all it takes is a single flick of a cigarette to destroy homes and lives. For those who don’t care, there’s a hefty fine for smoking. Let’s hope the City enforces it.

You are currently viewing the archives for December, 2017 at Under the Hollywood Sign.