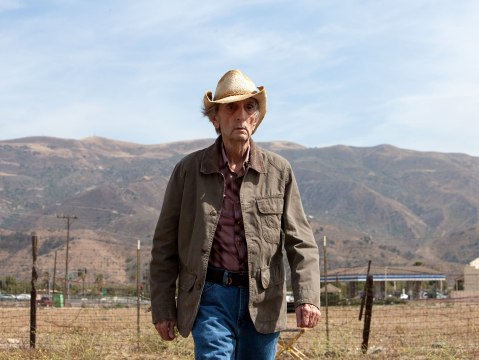 It was shortly before going to see his new film “Lucky” on Friday that I heard of Harry Dean Stanton’s death at 91. As in his work, his timing was uncanny. His exit from life that day made his last film, a wry examination of an elderly desert dweller coming to grips with death, all the more poignant for those of us who saw it.

Throughout his long career, which began in TV and movie Westerns and dramas in the 1950’s, Stanton was described as a character actor, one who excelled in secondary roles. The character actor label followed him even after he became a leading man in two 1984 films: “Repo Man,” and “Paris, Texas.” It was, I suppose, a reference to his anti-movie star looks: a slight build and a gaunt, weathered face that became more fascinating as he aged. Stanton’s nose, always prominent, came to dominate his face as the rest of his features receded. Increasingly, his visage looked less made of flesh than carved from wood.

But his looks had little to do with his acting. His method relied heavily on observation and stillness, two qualities that elude most actors and almost all movie stars. Lucky is a man of few words, yet there’s never a moment when Stanton isn’t fully thinking his thoughts and feeling his feelings. We see Lucky going through his day– getting dressed, shaving, brushing his teeth, exercising, venturing out to talk with fellow residents of his tiny town–quotidian activities made profound by Stanton’s acting. I wouldn’t have minded if the film had gone on in this way, like a more mundane “Groundhog Day,” but the screenwriters Logan Sparks and Drago Sumonja had a bigger theme in mind: mortality, and Lucky’s reconciliation with it. Filling out the story are colorful characters played David Lynch, Beth Grant, Ed Begley, Jr. and Ron Livingstone, but the film–and every scene in it–belongs to Harry Dean Stanton. For me the highlight is his unexpected, perfect singing of “Volver,” (“To Return”) at a child’s birthday party. More than a showcase for Stanton’s musical talents–he was an accomplished singer and guitarist–“Volver” is a song about memory, love, the passage of time and the inevitability of death:

Through his performance of “Volver,” Lucky gains an acceptance of his own end, a moment of grace that affects everyone in the scene. Days later, I’m still thinking about it.

You are currently reading Harry Dean Stanton, the Actor’s Prophet at Under the Hollywood Sign.