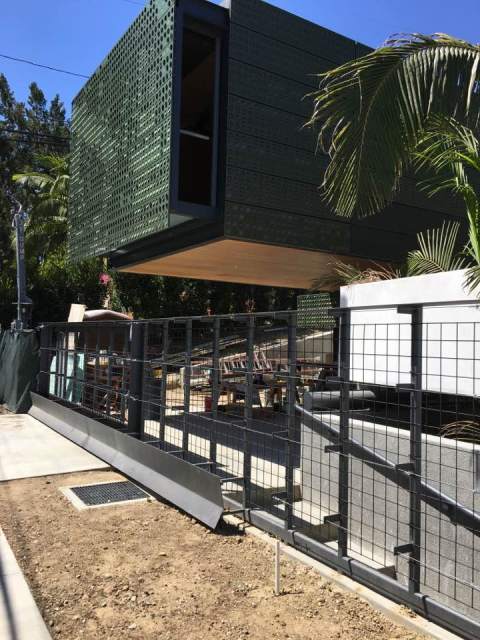 I’m the opposite of star-struck, yet in the nearly 28 years I’ve lived in Los Angeles I’ve encountered celebrities without trying to, usually in the least interesting places. Dry cleaners, hardware stores and doctors’ offices are the hot spots where I’ve run into Faye Dunaway, William Macy, Jeff Goldblum and Tracey Ullman. I’ve gone to dog training school with Henry Winkler and chatted with John Malkovich as we walked around Windsor Square, our former neighborhood. Recently I exchanged pleasantries with Gustavo Dudamel at the counter of my favorite pizza place while pretending not to know who he was. Though most of these people were nice, Winkler and Malkovich especially, until Sunday the only celebrity who ever thrilled me was Joni Mitchell, who once passed me on a sidewalk in Beverly Hills and was never seen again.

On Sunday my architect friend Steven Corley Randel was visiting me from Palm Springs. We had listened to KCRW’s “DNA” and been intrigued by the segment on the new house that Thom Mayne designed for himself and his wife, so we decided to drive over and take a look. (Though its location was given on the show, I won’t repeat it here.) After seeing what we could of the house from outside the fence, we stood on the sidewalk and talked about it. A man pulled up in a car and got out, at which point we realized it was the architect and homeowner himself. Steve and I introduced ourselves, complimented the design and were soon taking an exclusive tour. I still don’t know why Thom Mayne let us into his home, or why he spent half an hour showing us around, but he couldn’t have been more gracious.

Though I loved the house and said so, I couldn’t bring myself tell Mayne how much his architecture has meant to me. Before he won the Pritzker Prize and designed major projects for the Federal government, Caltrans and other big clients, he designed 72 Market Street, a restaurant in Venice I discovered as a visitor to Los Angeles in the late 80’s. Though the restaurant closed long ago and I have no memories of the food, I still remember the architecture: a soaring, modern space of great beauty and power. I also remember how I felt each time I was there: transformed into my best self.

Mayne also designed two other restaurants that I frequented after I moved to town: Kate Mantilini and Angeli, both of which have closed in recent years. Angeli was where my son grew up; we started eating there when he was five and went regularly for the next twenty years. Like Mayne’s other restaurants, Angeli remained fresh and modern looking throughout its lifetime, and was as attractive in daylight as it was at night. Nothing about the design detracted from the food; on the contrary, it enhanced it.

Great architecture elevates everyone and everything it touches, which is why Thom Mayne’s work is celebrated. I’ll never forget meeting him and seeing his house, and I’m grateful and still more than a little amazed that it happened.

You are currently reading On Unexpectedly Meeting My Favorite Living Architect at Under the Hollywood Sign.