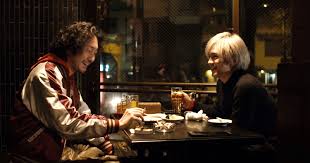 One of the bright spots of the past couple of months has been my discovery of two new Japanese series on Netflix, both excellent. Both shows are based on books: “Midnight Diner: Tokyo Stories” (“Shinya Shukudou“) on a manga (graphic novel) series, and “Sparks” (“Hibana“) on a novel. Season One for both series is available on Netflix, and both will continue.

“Midnight Diner,” takes place in one of the countless small, owner-operated restaurants located on side streets throughout Tokyo. What distinguishes this one is its hours–midnight to 7am–and its owner, a handsome, stoic man known as Master (Kaoru Kobayashi). Master’s facial scar and bearing suggest a mysterious past as a sword fighter, though it is never discussed. In his current life, Master is a talented cook who runs a tight ship: only one item on the menu but endless possibilities, based on ingredients he is given or has at hand. And though diverse viewpoints are welcome in the diner, there’s no fighting allowed.

Each episode is named for a different dish, most of which evoke strong feelings of nostalgia for those who order them. In “Corn Dog,” an old, washed- up comedian continues to treat his former protégé, now a successful TV actor, as his lackey. In “Tan-Men” (a kind of ramen), an actress-turned-chauffeur meets a late night D.J., who later recognizes her as the superhero idol of his youth. “Ham Cutlet” follows a soon-to-be-retired lawyer and his long-lost stepbrother who is fighting eviction from a city-owned apartment building.

Though each episode features different people, a core group of regulars provide both color and continuity. They include bar hostesses, two men who dress as women and a group of ladies who are either insomniacs or office workers on the night shift. Though separated by gender, sexual orientation and income, all are loyal to Master, who observes the action and offers sage counsel.

There’s a beautiful melancholy to the series that is at once universal and very Japanese. Watching it, I felt as if Yasujiro Ozu, Edward Hopper and the writers of “Cheers” had gotten together to make “Midnight Diner;” it’s that good.

Less accessible but no less fascinating is “Sparks,” which follows a two sets of Manzai stand-up comedians as their careers rise and fall. Manzai, which originated during the Heian Period (8th-12th centuries) but is strongly identified with Osaka during the Meji Era, involves rapid-fire bantering between a straight man (tsukkomi) and a fool (boke).

When the series opens, the young boke protagonist, Tokunaga (Kento Hayashi), and his partner arrive in Atami, a seaside resort city, to perform at its summer festival. Though they bomb, Tokunaga strikes up a fateful friendship with Kamiya (Kazuki Namioka), the boke of an older, more skillful duo, and quickly becomes his protégé. As the series progresses, Tokunaga’s star rises while Kamiya’s falls, changing but not destroying their friendship, which (like those in “Midnight Diner”) is cemented over restaurant meals.

For Japanese speakers, “Sparks” offers a bonus: it’s a crash course in slang-laden, Kansai dialect, male Japanese. For everyone else, it’s a bromance that sheds light on an ancient but still vital Japanese comedy tradition. Although it took me a few episodes to get hooked on it, I’m looking forward to Season Two.

You are currently viewing the archives for February, 2017 at Under the Hollywood Sign.