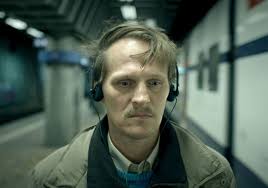 Though there may be some bad German films I’ve never seen one, which is remarkable given the number I’ve watched over the last thirty years. This past week’s German Currents brought to Los Angeles eight recent features and a documentary on Rainer Werner Fassbinder, whose huge oeuvre (forty-four films in the eighteen frenetic years before his death, in 1982, at thirty-seven) was my gateway into modern German cinema.

Unfortunately I could attend only the last night’s films. Both were excellent and shared a theme: social isolation in contemporary life.

In “Wild,” by writer/director Nicolette Krebitz, a solitary young IT worker named Ania (Lilith Stangenberg) is galvanized by the discovery of a large wolf in the park near her sterile apartment building. Soon she’s reading up on wolf hunting and constructing a perimeter of flags to trap the animal, which she tranquilizes, drags back to her apartment and, improbably, tames. As the wolf becomes domesticated, Ania becomes more feral, with dramatic consequences for everyone and everything around her. Stangenberg’s performance is astonishing, as is the wolf’s (apparently two animals played the role), and the ending is unforgettable.

Aloys (Georg Friedrich), the lonely protagonist of writer/director Tobias Nölle’s eponymous film, is a private detective whose misanthropy and profession have cut him off from normal human interaction. Filming and taping are Aloys’s means of expression as well as tools of his trade, and he pursues them constantly. At the start of the film, Aloys’s father and business partner has just died, leaving him completely companionless. After drinking himself into a stupor on a bus, the bereaved detective awakes to find his camera and latest videotapes gone. Soon he gets a call for ransom, which involves “telephone walking” with a mysterious woman. Through a conversational game, Aloys is gradually drawn out of his isolation and into a relationship with the thief, who turns out to be his suicidal neighbor.

Though neither “Aloys” nor “Wild” has U.S. theatrical distribution at this point, it’s likely that they will be available online in the near future. I recommend both films highly.

You are currently viewing the archives for October, 2016 at Under the Hollywood Sign.