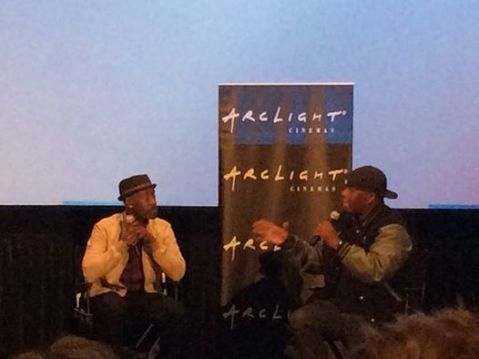 Biopics about artists usually follow a stringent set of rules. Whether in chronological order or flashback, we see subject as a child, learning how to paint/sing/play an instrument. Next comes the traumatic illness/injury/death of a parent that turns the child into an artist. Then comes the early careeer marked by hardship and rejection. Then there’s success and fame, usually followed by illness/substance abuse/legal trouble/money woes. For examples, see “Ray,” “Lady Sings the Blues,” “Mr. Turner,” “Coal Miner’s Daughter,” “Basquiat”–the list is endless.

While there’s nothing wrong with telling an artist’s story in a straightforward way, it’s fascinating when a filmmaker chooses another path. That’s what Don Cheadle does in “Miles Ahead,” which begins during the musician’s drug-addled hiatus from recording and performing in the 1970’s and ends with his comeback in the 1980’s. Although there are flashbacks to Davis’s early career and first marriage to the dancer Frances Taylor (Emayatzy Corinealdi), Cheadle doesn’t bother to show Davis as a child or even a trumpet-playing youth. I’d like to think this decision isn’t because Davis grew up in a middle class family–his father was a dentist–and studied at Julliard, but because Cheadle preferred a laser-like focus on what matters most: Davis’s music.

“Miles Ahead” is helped immeasurably by the fact that Davis is only depicted as an adult and only by Don Cheadle. The actor captures everything about Davis: his creative genius, his ferocity and his mercurial charm. In doing so, he transforms himself both inside and out. I can’t fathom how difficult it must have been to pull of such feat of acting and also direct the film, but it’s a rare accomplishment for anyone, let alone a first-time director.

At a Q&A last Friday night, Cheadle declined to say which parts of the film are factual and which are fictional, but there are a lot of both. The journalist played by Ewan MacGregor is fictional, yet there’s nothing fake about his character or his function: showing us Miles Davis’s dark period of drug abuse, gunslinging and reclusion. Davis’s abuse of Frances Taylor is factual–she has said, “I actually left running for my life,” and does in the movie. But other things that couldn’t have happened are true in their essence. Davis pushes against the wall of an elevator at Columbia Records, which becomes a door to his past as a musician. A punch thrown at one character lands on another. As the film lurches from place to place, traveling through time, watching it becomes less like observing and more like entering Davis’s complicated mind. In his abstract, improvisational approach, Cheadle weaves many strands into something pure. It’s a lot like jazz.

You are currently reading “Miles Ahead:” Don Cheadle’s Wildly Original Miles Davis Biopic at Under the Hollywood Sign.