Learning To Say No

Today I said no to writing a script based on a promising story that interested me very much. My reasons were two-fold. First, my vision for the project–a thriller set in a specific timeframe–clashed with that of the man who proposed the project, who seemed increasingly to want a biopic based on his life. Second, it became clear that although he’s not a writer he expected to collaborate on the script, despite the fact that (as I told him at the outset) I write alone. Turning down the offer was the right thing to do, as anyone could see. But the fact that I should have said no sooner wasn’t obvious to me, and that’s what this post is about.

Thirty years into my career, it still seems more natural to say yes than no, a fact I attribute to my gender and upbringing. Women are socialized to be agreeable, to say not only yes but thank you for every morsel they’re offered in life and for years I did, to my detriment. Before striking out on my own professionally, I didn’t get promotions or raises. This was not because I was undeserving but because I had no idea of how to ask for them, or even that I should. Saying yes was the default setting in my personal life as well, which explains why I stayed in relationships that weren’t working–for me, that is. As recently as few years ago, I was talked into serving on the Hollywood Homeowners’ Association, a brief disaster that could have been avoided if I’d simply followed my instincts and said no.

It wasn’t until my son was growing up that I realized how different males are in this regard. When answering the question “Do you want…?,” he would automatically say no, and nearly every time. Though he often reversed himself immediately, his default setting was refusal. At the time I thought it was funny but in retrospect it seems quite serious: saying no gives you power, even if you happen to have very little of it.

These days I say no much more than yes. In fact, I just did it again, on a much smaller business matter. The asker seemed unperplexed by my refusal, which probably means it was no big deal for him. But it was for me.

In a Time of Drought, Remembering Hollywood’s Brief Independence 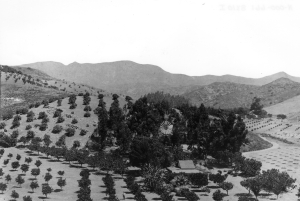 When I was making my documentary “Under the Hollywood Sign,” I was surprised at how many of the people who signed my releases wrote “Hollywood” rather than “Los Angeles” as their address. A century after its incorporation into Los Angeles, Hollywood’s history as an independent city seemed to endure in the minds of residents, whether or not they were fully aware of it.

Hollywood went from mostly unsettled land to a metropolis in a matter of two decades. Most of what is now the district of Hollywood was purchased in 1877 by Harvey and Daeida Wilcox, a wealthy Kansas couple who came west to Los Angeles and, after the death of their only son, went looking for a rural retreat. After laying out streets and building a home, they deeded property to churches and enticed other like-minded Christians to move to their town. New residents opened businesses and grew citrus and exotic fruits like pineapples and avocados. But by the turn of the century, Hollywood was more than a farm village: it had become a resort for city dwellers who came by bicycle and streetcar from downtown Los Angeles. Two restaurants catered to daytrippers, and the rather grand Hollywood Hotel provided lodging for those who wanted to stay longer. Among the town’s charms was its microclimate: noticeably cooler than downtown Los Angeles, Hollywood was known for its ocean breezes. (In spite of Hollywood’s tall buildings, these can still be felt near Sunset and Vine, and sometimes carry a whiff of salt.)

In 1903, Hollywood was incorporated as a dry, Godly city: the un-Los Angeles. Its first laws were sumptuary: no alcohol for any purpose, either at home or in businesses; no gambling, no brothels. Its dryness was absolute: liquor going west from downtown had to be transported around Hollywood, a substantial detour that pleased neither merchants nor the Los Angeles City fathers. Though Harvey Wilcox, the stricter of Hollywood’s founders, died in 1891, his widow Daeida (despite her remarriage to Philo Beveridge, a bon vivant who enjoyed flouting the law by drinking wine) kept up her husband’s teetotaling tradition.

Things might have continued along these lines for a while longer if not for the problem of water. Hollywood had very little, and more often than not found itself in drought. The start of construction on the Los Angeles Aqueduct in 1905 allowed City Hall to present the town with an ultimatum: either become part of Los Angeles or make do without its water. Knowing the town wouldn’t survive without access to the Aqueduct, Hollywood gave up its independence, becoming part of Los Angeles in 1910. Today, in the fourth year of a severe drought, it’s difficult to argue with the decision. 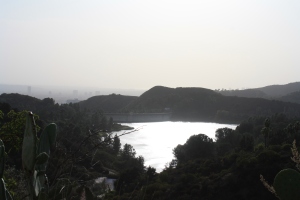 Yet Hollywood still feels distinct from Los Angeles, even in the midst of its current building boom. In 2000, a referendum was launched to return Hollywood to independence, but Los Angeles fought hard against it and it failed. Today Hollywood’s seven years as an incorporated city are remembered through its bylaws, which reside in bound volumes the Los Angeles City Archives. But Hollywood’s larger legacy is quotidian: its customary use by residents when giving their address.

The Journey Is Greater Than The Destination

For years I’ve been working on a novel. It was inspired by a trip I took shortly after finishing my first documentary, “Jim Thompson, Silk King” in 2001, though at the time I had no sense of it as anything more than an adventurous vacation. Soon after I returned from it I flew to New York, where JTSK was in a festival; it showed on September 8th. As fate would have it, I got back to Los Angeles hours before the attacks of September 11th, and for a long time no one wanted to think about documentaries, or entertainment in general. After marketing JTSK as much as I could during that grim time, I made its previously planned companion, “The Jim Thompson House and Art Collection.” By this time it was 2005, and my 2001 trip had receded long enough for me to start writing a novel based on it. As I was finishing the first draft, I moved to Beachwood Canyon, which involved selling one house and buying another that turned out to more of a fixer than expected. When I was finally settled, I began preproduction on my documentary Under the Hollywood Sign, another long-simmering idea. Although I initially thought I was making a little neighborhood documentary, Beachwood’s history turned out to be enormous, and UTHS grew into a major project: thirty interviews, many hours of footage and hundreds of images. The project kept me occupied for the next three years, at which point it was late 2009. In 2010, I finally dug out my novel and starting writing again. Every summer since then, I’ve done another draft; now, four years later, the result is tangible: a 355-page manuscript about a journey, and the embodiment of my own long trek.

Beyond the films and moving house, why did it take me so long? There isn’t any simple answer, but it’s clear that reading novels doesn’t teach one to write them. And writing novels doesn’t equal finishing them: a previous attempt ended in frustration. (Recently I learned that Joyce Carol Oates’s late husband left a novel–his only novel, chipped away at for decades–unfinished when he died. It was not reassuring.) From a practical standpoint, the work would have gone faster if I had revised printed drafts rather than doing it on my computer. Because the novel existed only virtually, a number of gaps and errors went unnoticed for too long. But the biggest setback came during the summer of 2013, when a Time-Warner technician cut the power and crashed my computer. (He had assured me that I could keep working while he ran new cable to the house.) When everything went black, I lost the draft I was working on, including a substantial part of the last section. Although I had saved a previous draft on Dropbox, I was never able to recover what had disappeared. Worse yet, I was afraid to look at the manuscript, much less work on it, for several months.

But eventually I did. This summer I knew I had to finish so I soldiered on, finally getting to the end on Labor Day. This month I’ll send the manuscript out to some friends who have kindly volunteered to be my first readers. After that, I’ll work on selling it. One way or another, it will be published. But let’s face it: we’re not living in the Age of the Novel and no one really cares. So why did I bother? Because, with the exception of my (easily fulfilled) goal of motherhood, all my ambitions have paled in comparison to my desire to write a novel: it’s a dream I’ve had since the age of twelve. Accomplishing it has taught me many things, one of which is to love the process, not just the result. And even if only my friends and family read it, my reward has come already: I’ll soon be starting two new projects, neither of which would have come my way if I hadn’t persevered on this one.

You are currently viewing the archives for September, 2014 at Under the Hollywood Sign.