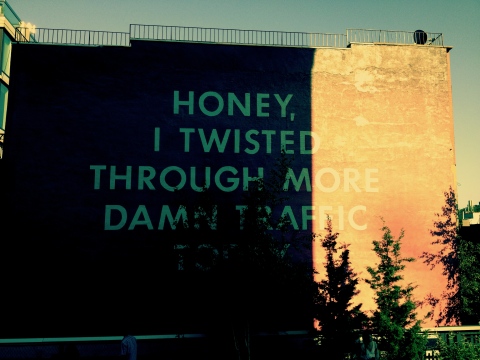 I spent the last week in New York, on a much-needed break from Los Angeles in general and Beachwood Canyon in particular. Or so I thought. On Day 1, riding the subway downtown, I found myself sitting next to a young woman having a cell phone conversation about her teaching job in Culver City. Later that same day, I sat in a Chinatown restaurant listening to three twenty-somethings discussing Burning Man and Coachella. It was as if Los Angeles had followed me to New York. But my biggest LA moment was deliberate: having learned of a new Ed Ruscha commission on the High Line, I hoofed it over to West Chelsea for a look. Entering the park at W. 23rd Street, I initially walked by the work because of its size: I didn’t realize it took up the entire side of a building. A word painting on a hot pink background, it reads, “Honey, I Twisted Through More Damn Traffic Today”–an LA sentiment if ever there was one. It was appreciated by a crowd of passersby as well as a steady audience on the bleacher-like seating across from it. 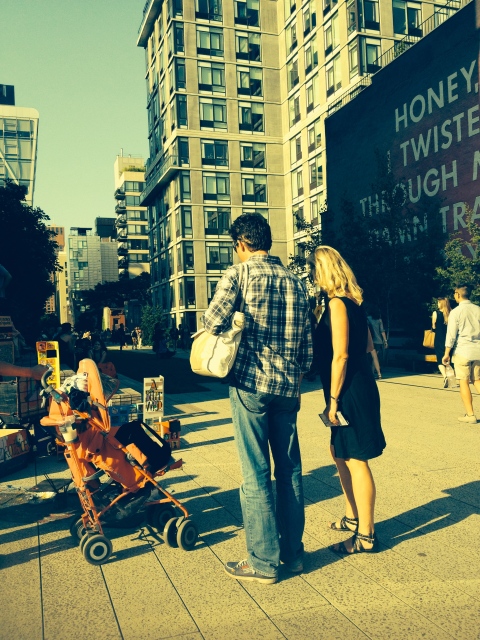 Although today Ed Ruscha is an international star whose work can be seen in museums and collections worldwide, when I first became a fan of his work, in the early 90s, he was still considered a “California artist” by the New York art world, relegated by geography to a secondary tier. (Disclosure: I met him briefly during that time, along with Billy Al Bengston, though only I would remember.) The fact that his most famous paintings, including “Twentysix Gasoline Stations” and “Norm’s, La Cienega, On Fire,” depict Los Angeles didn’t ingratiate him with New York critics. Nor did the fact that he never lived in New York, having come directly to Los Angeles from his native Nebraska to attend what is now CalArts. (Born in 1937, Ruscha is probably unique among his Pop Art contemporaries in bypassing the NYC rite of passage.) His word paintings, “Another One of them Bikini and Chainsaw Movies” and “Another Hollywood Dream Bubble Popped,” don’t exactly bring to mind Manhattan. Neither does his famous photography collection, “Every Building on the Sunset Strip.”

But instead of attempting a shift in subject matter, as another artist might have, Ruscha continued along his chosen path, creating images of the Hollywood Sign, palm trees and LACMA. (His iconic “The Los Angeles County Museum on Fire” is owned–in a delicious bit of irony–by the Hirshorn Museum in Washington, D.C.) As an artist Ruscha has always been his own man, resolute in his methods and subject matter. But along the way something interesting happened: the New York art world embraced him, and on his terms. His work was prominently displayed in the 2012 Met show “Regarding Warhol: Sixty Artists, Fifty Years,” a blockbuster that probably influenced the High Line commission. Now a blue chip artist with a worldwide following, Ruscha hardly needs my promotion. But the High Line painting will be up until May, 2015 and is well worth a visit. 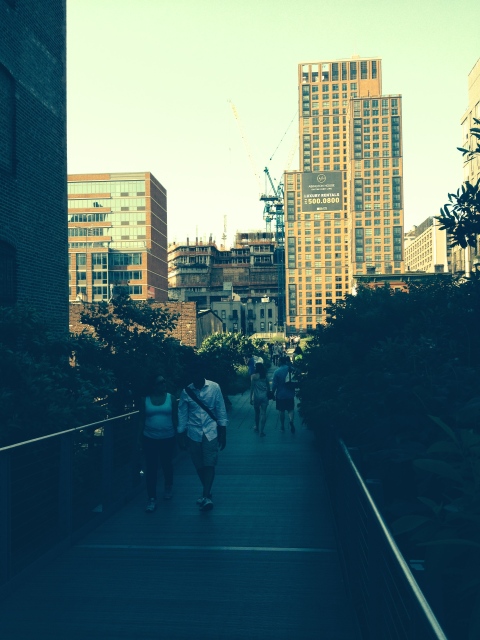 You are currently reading In New York, Vivid Reminders of Los Angeles at Under the Hollywood Sign.