In response to the tourist gridlock at the end of Beachwood Drive, the Los Angeles Department of Recreation and Parks will begin construction tomorrow on a wrought iron gate at the northern end of Beachwood Drive, where Griffith Park begins. When the project is completed in 6-8 weeks, pedestrians will have access to the Hollyridge Trail between sunrise and sunset. However, no vehicles will be allowed past the gate, with the exception of Rec and Parks vehicles and those of visitors to Sunset Ranch.

For those who wonder why this measure is necessary, here’s a link to a video shot by Tjardus Greidanus a block above Beachwood Village one Saturday:

The Urban Magic of “Her”: How Great Production Design Created the Los Angeles of the (Near) Future 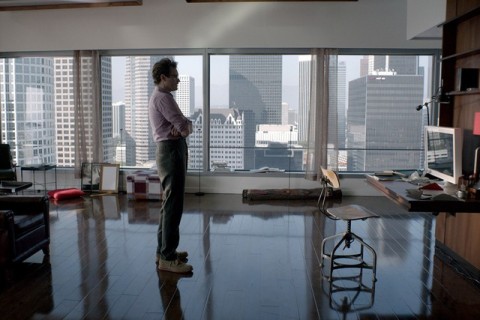 Regardless of one’s opinion about a romance between a man and his OS (let alone whether such a romance can be considered futuristic), “Her” is undeniably gorgeous to watch. It’s also the only film in recent memory to be set in a future that is livable, much less desirable. Instead of the dark, dystopian city of “Blade Runner,” we are dropped into a bright, orderly Los Angeles of tall buildings and excellent mass transit. Though single-family homes still exist, Theodore Twombly prefers a high-rise apartment, and is so well served by public transportation that he neither owns nor needs a car. Why would he, when trains and subways take him everywhere, including the beach and the mountains?

In the near future of “Her,” Los Angeles has grown better as well as bigger. Shots of the Basin show a recognizable skyline, except that there are many more highrises in the areas between Downtown, Hollywood, Century City and Westwood, as there undoubtably will be in the years to come. These new buildings are CGI creations, but the jarringly smoggy scenes featuring elevated plazas and walkways were filmed in Shanghai. In them, one catches glimpses of the Bund, Shanghai’s riverfront commercial district, where old colonial buildings co-exist with new skyscrapers. And though Los Angeles will never have a navigable waterway, the broad curves of Huangpu offer a tantalizing suggestion of the future LA River. 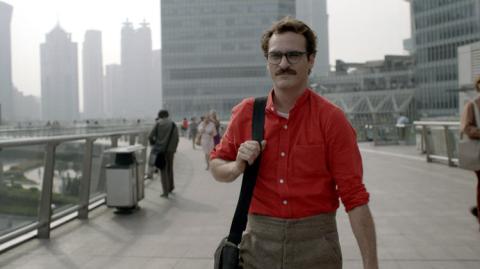 Shanghai Stands In for Los Angeles

But many aspects of “Her” didn’t have to be imagined at all, since they already exist. Theodore makes extensive use the Metro, even if it doesn’t yet go all the way to the beach. And he lives in a real place: the South Park district of Downtown, on the 35th floor of the Watermarke Tower (705 W. 9th Street). The buildings seen from his windows are all real buildings, shown to maximum advantage by the production designer K.K. Barrett, who covered the upper window panels and switched the glass from tinted to clear.

Says Barrett, the “focus was to bring the outside city in, and push light towards [Theodore].” The resulting message is unmistakable: Theodore lives in the heart of a dynamic and desirable city. Though he is shy and lovelorn, his location confers an enviable status. In the photo above, Theodore is framed against a view of nine notable towers: (l-r) 777 Figueroa, Ernst + Young Plaza, PWC Plaza, Union Bank Plaza, HSBC, City National Plaza, Bank of America Plaza, AON and Verizon (MCI Plaza).

Arguably, the real love story in “Her” is not between Theodore and his OS but the director Spike Jonze and Los Angeles. Having escaped both the dull suburban sprawl of its past and the ruins of its previously imagined future, Los Angeles appears a beautiful, modern and sustainable place. It’s obvious why Theodore, a dreamer of the first order, would want to live there, and why others would as well.

Thanks to Ian McFarren Anderson for identifying the buildings seen from Theodore’s apartment.

As musical canyons go, Beachwood has never been as famous as Laurel, whose reputation was burnished by Joni Mitchell (see “Ladies of the Canyon”). Nevertheless, Beachwood Canyon had its share of 60s and 70s musicians, including The Doors, J.D. Souther and Linda Ronstadt, as I found out while doing research for my documentary Under the Hollywood Sign.

Though I already knew that The Doors had taken their name from Aldous Huxley’s book The Doors of Perception , it was his widow Laura Huxley’s assistant, Stephanie Horsley, who verified that the band also lived in Beachwood Canyon. Horsley lived on Hollyridge Drive in the late 1960s, in a house overlooking the one The Doors were renting. In her interview, she recalled window-rattling jam sessions, after which the band members and their girlfriends would sleep out on the roof.

Another of my interviewees was the musician and producer Alan Brackett, whose band The Peanut Butter Conspiracy was active from 1966 to 1970. The PBC made three albums, contributed songs to movies such as “Run Angel Run” and had a Billboard hit, “It’s a Happening Thing.” Now Alan has announced a new CD featuring (and named for) the band’s late, great vocalist Barbara “Sandi” Robison. “Barbara,” which includes five previously unreleased songs, is available for sale at https://www.createspace.com/2050813 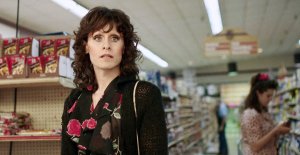 Jared Leto’s moving performance in “Dallas Buyers Club,” for which he won the Academy Award for Best Supporting Actor last Sunday night, would seem beyond reproach. As Rayon, a transgender man who joins forces with rodeo cowboy Ron Woodroof (Matthew McConaughey) in their shared fight against AIDS, Leto disappears into his character, becoming a three-dimensional, third-sex wonder. Total transformation is never easy to pull off and so much harder while starving in heels, wig and a dress. I thought Leto would receive universal acclaim for his accomplishment, but no sooner had he won the Oscar than this article, complete with blackface references, appeared:

It was written by Fallon Fox, a transgender Mixed Martial Arts fighter who believes roles should go only to people who essentially are their characters, rather than to actors capable of becoming their characters. Skill counts for nothing to Fox, who believes any trans actor could have rendered Rayon better than Leto, simply by virtue of being transgender. (By that measure, Matthew McConaughey shouldn’t have snagged the lead, since he is not a sexually promiscuous bullrider/electrician, but Fox makes no mention of him.) At the heart of Fox’s thesis are two assumptions: that shared experience equals authenticity, and that for specific roles, the transgendered, disabled, etc.–should be “just given a chance” to “become stars.” But the latter would render the acting profession an equal-opportunity reality show, while the former is simply untrue.

Far from being an asset, an actor’s close similarity to his character reduces objectivity, the quality essential to the creation of a three-dimensional character. As a non-female, non-transgender actor, Leto had to dig deep within himself to play Rayon. It shows: far being a man in drag (see Lemmon and Curtis in “Some Like It Hot,” Hoffman in “Tootsie,” and any number of Monty Python sketches), Rayon is fully realized. If she is an invention, she appears to be her own invention, not that of the actor.

Rayon has no parallels in western theater or film, but I immediately recognized her counterpart in Kabuki, where all roles are played by men. Onnagata, the actors who play only female roles, are the most celebrated of Kabuki actors, and for good reason. Like Rayon, they are not men imitating women. Rather, they are stylized, idealized females who are brought to life by men. Tamasaburo Bando, the greatest living onnagata, is neither young nor female, yet he provides a mesmerizing example of a young girl in “The Heron Maiden:”

A comparable alchemy exists in Cubism–specifically, in Picasso’s paintings of women. Figures are deconstructed and rearranged until they are radically changed, yet their femininity emerges in full force. The geometry of Cubism shows figures in greater complexity than in realistic painting, with its single viewpoint. There are also messages encoded in Picasso’s shifting angles and planes. In “La Reve,” below, the fact that Marie-Therese Walter’s face forms a heart speaks volumes about Picasso’s love for her, while the triangle of her hands points to her pubis–a scandalous detail that was missed by no one when the painting was new.

Deconstruction requires distance, which brings me back to Rayon. It is Leto’s remove from the character that allows him to explore her in archeological detail, something a transgender actor drawing on her own experience could not. The resulting character is profound, a human being that Leto embodies to stunning result. Like Tamasaburo Bando and Picasso, Leto never stoops to imitation; instead, he unlocks Rayon’s essence and reveals it to the world.

After the Storms: Oscar Sunday in Hollywood

Two back-to-back storms have brought more rain to Los Angeles in the past three days than has fallen in the past year–in some areas, twice as much. In Beachwood Canyon at least two trees have fallen, and one of them caused a power failure for some residents last night. There has been some flooding and a lot of mud, but today the Canyon looks green and fresh. From the Farmer’s Market this morning the Hollywood Sign was invisible, shrouded in mist and clouds.

Grey weather and intermittant showers have reduced the Canyon’s tourist traffic dramatically, since most people want their photos of the Hollywood Sign against a blue background. But while walking around the neighborhood a little while ago, I met a visitor from Antwerp who was undeterred by the less-than-ideal conditions. It was his only day to see the Sign, and I was glad to direct him to a good–and no doubt uncrowded–spot for picture-taking.

You are currently viewing the archives for March, 2014 at Under the Hollywood Sign.