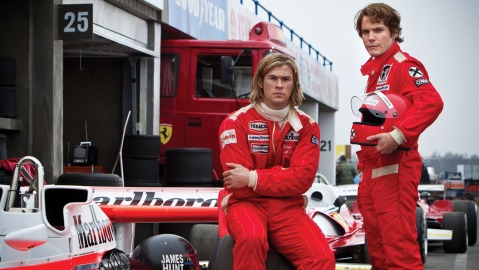 The trouble with car racing movies is that they’re never just about racing: if they were, audiences would be better off watching Speed Channel. So the plots always focus on off-track matters, usually love, which is where they usually go wrong. Who really cares about the non-racing problems of a professional speed demon? Apparently the directors of such varied car movies as “Grand Prix,” “Winning,” “Two-Lane Blacktop” and “Days of Thunder.” “Rush,” the new Formula One film from Ron Howard, veers into decidedly non-automotive territory as well, by depicting the courtship of the Austrian driver Niki Lauda and his wife Marlene. Fortunately, the main story revolves around Lauda’s professional rivalry with James Hunt, the British playboy who challenged him in the 1976 World Championships.

The script, by Peter Morgan, takes us from the two drivers’ beginnings in Formula Three to the heart stopping final race of the ’76 season–the rain-soaked Japan Grand Prix. On the whole, Morgan tells the story accurately, taking us through the year, race by race, after setting up Hunt and Lauda’s compelling back stories. He takes liberties mainly in painting the two rivals as polar opposites–the untelegenic, humorless brainiac versus the sexy golden party boy–which is too simplistic to be entirely true. As Lauda has said in interviews, he wasn’t as “strict” his grim, monkish portrayal by Daniel Bruhl (How could he have been, in the world of Formula One?) More significantly, the script’s lighthearted portrayal of James Hunt glosses over his disturbing dark side. A compulsive substance abuser and pioneering sex addict, Hunt was mercurial on and off the track, and was said to have had sex with 5,000 women. His death at 45, from a heart attack, is attributed to decades of heavy drug use, despite his sobriety during the last few years. In a libertine era, Hunt’s behavior went far beyond that of his wildest contemporaries. Already notorious for taking drugs and having sex immediately before jumping into his racecar, he prepped for the Japan Grand Prix by having sex with 33 British Airways stewardesses in a drug-fueled two-week orgy at the Tokyo Hilton. (Unsurprisingly, this escapade doesn’t make it into the film.) Another thing that Morgan shows only belatedly is that Lauda and Hunt were friends–comrades in arms who, for all their differences, admired one another. But that wouldn’t have made such a good story, would it?

The acting is uniformly wonderful, although one can’t help feeling sorry for Bruhl, whose prosthetic overbite makes him an unflattering doppelgänger for Lauda. It’s particularly unfair that the real-life Hunt paled in comparison to Chris Hemsworth, who plays him. Hemsworth, who isn’t English but Australian, is a 6’4″ golden god best known for playing the lead in “Thor.” His dazzling half-moon smile and effortless charisma far outstrip James Hunt’s, who in archival interviews and television appearances displays a wry charm and better-than-average-looks, but nothing off the charts.

As far as the racing goes, I can’t fault the film at all. Ron Howard, whose previous films (“A Beautiful Mind,” “Apollo 13,”) have been solid entertainment but not works of genius, shoots the sequences beautifully, combining flawless esthetics–I especially loved the bright reds and blues that made the crowd scenes pop–with the nuts-and-bolts thrills of spinning wheels and moving pistons that owe a debt “Grand Prix.” Not previously known as a racing enthusiast, Howard shoots the track as if he’s lived there. He also puts an aficionado’s emphasis on sound recording and mixing, achieving an aural result that matches the dynamic visuals. It’s a career best, and if “Rush” doesn’t popularize Formula One in the United States, I don’t know what will.

You are currently reading “Rush”: The Best Car Racing Movie Since “Grand Prix.” at Under the Hollywood Sign.