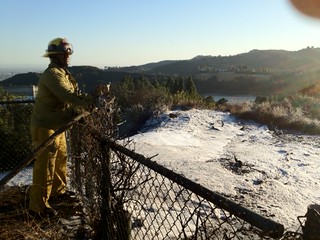 “Spiral Jetty” and “The Lightning Field”: Two Masterpieces of Land Art and What It Takes to See Them

My interest in Land Art began in childhood, when I first saw photos of Robert Smithson’s Spiral Jetty, then newly built, in a magazine. By the time I was old enough to visit the 1,500 foot rock, earth and salt crystal coil, it had long been submerged by the waters of the Great Salt Lake, which rose to their normal levels two years after the work’s completion in 1970. In 1973, Robert Smithson was killed in a plane crash at 35, while overseeing a new work. Spiral Jetty, undoubtably the masterpiece of his brief career, would stay underwater for three decades, remembered only in drawings, photographs and Smithson’s short film by the same name.

In 2003, I happened to see an excellent retrospective of Smithson’s work while in London. There must have been other shows at the Tate Modern that day but, aside from some Damian Hirst vitrines, all I remember is the Robert Smithson exhibit, which was electrifying. I wandered in a Land Art admirer; I emerged, after multiple viewings of the film “Spiral Jetty,” a panting enthusiast for a work of art that seemed as lost as Atlantis.

Then, the following year, the unthinkable occurred: Spiral Jetty rose like a serpent god from the depths of the Great Salt Lake, courtesy of a major drought. Even more unexpected than the work’s reappearance was its visual transformation: long immersion in the Lake had covered the black basalt surface with salt crystals, rendering it white and glittering. It was a sensation, drawing admirers who walked its length until the waters rose and submerged it the following spring. In 2010, Spiral Jetty re-emerged, only to be covered by rising water in 2011. Despite my interest, however, I witnessed neither of Spiral Jetty’s appearances, nor did anyone I know.

Which is the problem with, and the charm of, Land Art. Until the recent opening of Levitated Mass at LACMA, inaccessibility was an inextricable part of the experience. You either saw Land Art second-hand, in photos, or traveled to its (inevitably) remote location. In the case of Spiral Jetty, there are two ways to experience it directly: from above, which requires a charter plane (or perhaps a commercial flight whose route happens to take it directly over the site). The other is at ground level, which is what Smithson intended. To do that, you must fly to Ogden, rent a car and take the I-15 to Zion. From there, you drive along a rough gravel road until it ends, and then walk past cattle, an old trailer, a Dodge truck and an amphibious landing craft. When you reach the Great Salt Lake, there it is. Geoff Dyer, in an article published last year in the New Yorker, describes his encounter:

The jetty extended in a long straight spur before bending inward. The water was plaster-colored, slightly pink, changing color as it was enfolded by the spiral, at its whitest in the middle of the coil….With the sound of birds and lapping water, it was lovely now–in a subdued, melancholy sort of way. It felt desolate, but this was not a place of abandoned meaning.

Dyer also visited another 70s Land Art masterpiece for the same article: Walter De Maria’s The Lightning Field, located near Quemado (burned in Spanish), New Mexico. Like Spiral Jetty, the work is administered by the Dia Art Foundation, whose instructions to potential visitors (who must reserve well in advance) include the following:

Dia provides transportation to The Lightning Field from Quemado, New Mexico, which is about a 2½- to 3-hour drive from Albuquerque. Please arrange to arrive in Quemado no later than 2:00 pm. on the day of your visit and check in at Dia’s office in the white two-story building on the north side of the town’s main street. It is a 45-minute drive in our vehicle from Quemado to The Lightning Field; you may not take your own vehicle. You will be returned to Quemado at approximately noon the following day.

Six visitors at a time stay overnight in a remote cabin, watching the installation–a 1 mile x 1 kilometer rectangle in which 400 stainless steel poles are arranged in a grid–throughout the day and night. As the work’s title indicates, lightning sometimes strikes the poles, but although that occurance has been photographed memorably, it’s not guaranteed. I asked the poet Carol Moldaw, whose long poem The Lightning Field was inspired by her visit, for tips on the best times to visit, lightning-wise, and she said late July and August. Here’s the rub: I do want to see The Lightning Field for myself, but not so much that I want to share a remote cabin with strangers after a long day of travel. (I don’t have five friends who care enough about Land Art to make the trek.) I also suspect Carol’s poem might have captured the installation better than any camera:

I had thought the rectangle of steel shafts
would feel imposed upon the pristine landscape,
an arbitrary post-modern conceit
spoiling the view. But once inside the matrix,
surrounded by the austere expanse, the sleek
sparsely planted forest of tempered poles
fanning out and lofting above me, I found
that the field’s exactingly strict geometry
yielded not just jackrabbits, lizards,
blue-winged moths, gilia, and grasshoppers
flinging themseles against my face, but also
a sense of seemingly endless possibility.

Which leads me back to the newly opened Levitated Mass at LACMA. It’s quite possible that this Land Art work will be seen by more people in a few months than have seen Spiral Jetty and The Lightning Field in their entire existence. No doubt Levitated Mass will be the first Land Art work experienced by most of its viewers; the fact that it probably will be their last is nearly as impressive as the work itself.

“Levitated Mass”: Land Art for the Rest of Us

A few days ago, I dropped by LACMA for my first look at the newly opened Levitated Mass, Michael Heizer’s suspended granite megalith. Popularly known as The Rock when it made its arduous 11-day journey from quarry to Mid-Wilshire in March, it has been transformed into art by its placement over a sloping 456-foot-long slot that allows viewers to pass directly under it. Having passed the boulder during the construction period, I had some idea of its immensity; what I didn’t know was how it would feel to walk through the slot. I imagined the walkway would be mobbed, much as the boulder was during its trip from Riverside County, and that crowds would be part of the experience. But on a Monday afternoon visitors were sparse, allowing me to dawdle and take numerous photos.

What amazed me about Levitated Mass–aside from the peaceful aura of a piece previously described as a “rock star”–was how different the boulder looks from different vantage points in the slot. Approaching from the west, it appears Matterhorn-like, while the eastern side appears comparatively flat and squat. I found it hard to believe it was the same rock. Also interesting is the walkway itself, a smooth concrete passageway so wide you could drive through it in a large pickup truck. (LACMA’s website has an interesting video about its engineering and construction that shows a mind-blowing amount of rebar.) When I was there, many of the visitors seemed as taken by its high walls, running their hands along the canted slots that run through each.

As far as I know, Levitated Mass is the only large Land Art work to be placed permanently on the grounds of an urban museum, a fact that can hardly be overestimated. By allowing the general public access to a monumental work that normally would be open only to a handful of curators, collectors and fans, LACMA and Michael Heizer have done a boldly democratic thing. And though Levitated Mass is an impressive work of Land Art, its greater importance lies in its accessibility.

Next: Two masterpieces of Land Art, and what it takes to see them.

You are currently viewing the archives for July, 2012 at Under the Hollywood Sign.