I first noticed Hargobind Singh several months ago, climbing the historic stairs near my house. As many people use the stairs, it wasn’t until I saw him several times in a single weekend that I realized he was leading a tour group.

The vast majority of tourists who come to Beachwood Canyon do so by car or bus, getting out only to photograph one another with the Hollywood Sign in the background. Not surprisingly, they don’t see much. In contrast, Hargo’s groups discover the neighborhood via its network of historic stairs, seeing places they otherwise wouldn’t see.
Intrigued, I invited Hargo to be interviewed for Under the Hollywood Sign.

What drew you to being a tour guide?

I have always been into the outdoors, and when people would come visit I would take them around to see some of LA’s natural beauty in the Santa Monica Mountains and to explore unique neighborhoods around LA. My guests would have such a great time that they said that their trip to LA was one of the best vacations they have ever had. Several of my friends and relatives suggested that I start a tour company so that I could share this experience with others. So 3 years ago I started my company LA Active Adventures.

How did you promote your business?

When I first started, the economy just started to go down so it was slow going at first. I started off going to hotels and informed the concierge about my tour company and my unique tours.  I even took a few concierges on my tours. I had my big break last December when I contacted Living Social and offered to list my Hollywood Sign Adventure with them.  I wasn’t expecting much, since I had 3 years of slow business. I ended up selling about 1700 of that one tour.  It has been mostly locals that purchased the deal.  Now I am getting referrals from people that have done my tours.

How long have you been guiding tours of Hollywoodland?

After discovering this neighborhood last May, I thought it would be a good addition. Since I did the deal with Living Social, I have been doing the Hollywoodland tour almost every day since December 9th.

What are your plans for the future?

My plans for the future are to continue to share this unique experience with locals and visitors.
For further information, go to www.laactiveadventures.com

MASCO in Hollywoodland: A Progress Report

Our Summer of MASCO/Hope Anderson Productions

The sewer project that has been Hollywoodland’s most annoying daytime summer event started a couple of months ago but reached its apex, at least in my area, during the last couple of weeks. Fortunately, I missed 12 days of jackhammering during a recent vacation–the only time I can remember being gone during a noisy period. When I got back, I noticed a lot of trash in my black garbage bin–which was strange not only because I had been away, but because it was made up of styrofoam lunch boxes that should go into the blue recycling bin. That blue one, I noticed, contained empty concrete bags. Then a couple of days later, I found one of my green garden bins overloaded with uprooted plants (and a cardboard tube). None of it was mine.

It could only have been the detritus of MASCO, the subcontractor doing the sewer work for the City. 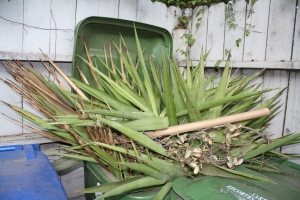 Beyond the creepiness of having someone else’s incorrectly sorted trash in my bins, MASCO’s workers trespassed on my property, opening an enclosure in order to dump it. While it wasn’t the first time I’ve had my bins commandeered by strangers–phone company workers routinely dump trash in my bins while working on a nearby box–it was the most egregious. The next day, when I found MASCO workers directly outside my house, I said the least they could do was to sort their recyclables and move my bins to the curb. They agreed, yet when I returned at the end of the day, I found the bins in their usual place and the same styrofoam boxes in the black one. The green one was especially hard for me to drag to the curb.

The next day I found a MASCO backhoe parked directly in front of my garage, preventing my exit. It was midday; no one was around, apparently because they were on their lunch break. Now running late, I had to race around a three-block area to find anyone from MASCO, at which point I unleashed a tirade about their lack of consideration. The worker pretended not to understand what I was saying, so I repeated it in Spanish. His attitude was somewhere between “who cares?” and bafflement.

Because none of the workers would identify their foreman or give me their supervisor’s telephone number, I decided to track down someone in authority at MASCO. When I reached the supervisor, Alfred Garcia, and told him my story, he was appalled and apologetic, promising he would “talk to those guys.” I hung up feeling the worst was over, and was relieved when the crew decamped for another part of the Canyon.

But early Thursday morning they were back, repaving a nearby street, and by 8:15am, there was a truck being parked in front of my garage. The driver was utterly mystified when I told him he couldn’t leave it there.

These photos were taken around 7pm on Saturday, July 16th. Though Angelenos were warned against driving during the 405 shutdown, many tourists were undeterred–after all, what’s more important than posing in front of the Hollywood Sign? 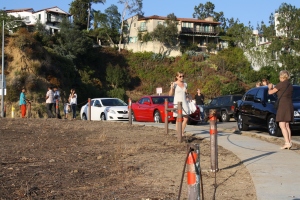 High Season for Tourists in Hollywoodland

This weekend’s so-called Carmaggedon has lessened the volume of traffic on Beachwood Drive, at least for now. Normally the traffic roars up Beachwood Canyon all day long, but today there have been moments, and even a minute here and there, without a car. It won’t last.

Hollywoodland’s internecine feud–between those who favor signs toward to the Hollywood Sign and those who don’t–continues unabated. Since the directional signs that mysteriously appeared in the spring (and immediately increased the volume of traffic) came down, a few neighborhood activists have taken it upon themselves to direct traffic toward the Sign–something they don’t have the right to do in non-emergency circumstances. Their ad hoc policing has provoked heated exchanges on the street that must baffle tourists, none of whom seem to think their desire to reach the Hollywood Sign is the cause.

But it is. Whether driving up Beachwood Drive at 15 mph in a 30 mph zone while videotaping the Sign, blocking all northbound traffic, or simply parking their cars or bodies in the middle of Beachwood Drive for still photos, tourists prevent residents from getting home. Passing is not only prohibited but impossible on the narrow, winding stretch below the Gates where most tourists pose for photos, so residents are stuck behind cars moving at a crawl, if at all. Honking the horn earns us the middle finger, as I was reminded last weekend, when it took all my restraint to respond in kind.  The fact that this irritation occurs daily explains why so many Hollywoodlanders are in a perpetual state of frustration.

Then there’s the truly terrifying matter of tourists’ smoking, which they tend to do at the lookout on Canyon Lake Drive and in Lake Hollywood Park. Both areas are extremely prone to fire and have “No Smoking” signs that deter no one. According to the Hollywood Homeowners’ Association, Griffith Park rangers and City officials who patrol the area are loath to ticket smokers because they don’t want to discourage tourist revenues. Yet it was tourists who started the 2007 brush fire that burned from the Oakwoods Apartments on Barham up to the Hollywood Sign–a 150-acre fire that put hundreds of homes in jeopardy and required 200 firefighters to put out. True to form, the City of Los Angeles declined to charge the teenagers who were at fault, no doubt because they were from Illinois.

In spite of all this, most Hollywoodlanders aren’t hostile to tourists who aren’t breaking the law. Those who drive and park legally (or better yet, walk) and don’t smoke get my full cooperation, including directions and answers to questions on neighborhood history. As a result, I’ve met people from all over the world, all of whom were thrilled by their proximity to the Hollywood Sign. Last Thursday in Lake Hollywood Park, I struck up a conversation with a nice family from Dubai. The father asked if there was a restaurant or cafe near Lake Hollywood where he could take his sons “for the view.” When I told him no, that it was a purely residential neighborhood, I recognized the oddness of the situation from his perspective. Virtually every country in the world clutters its beauty spots with hotels and restaurants, but America is justly famous for its unspoilt vistas. Despite its houses, Hollywoodland still resembles a park more than a town, which for its residents is both a blessing and a curse.

Like a lot of other people, I moved to Beachwood for some peace–and much of the year, I get it. Birds sing, coyotes hunt, owls hoot–it’s a natural wonderland, especially at night. But not in summer. My six summers here have been noisy enough to drive me indoors during the day, while many nights have been almost sleepless, thanks to my neighbor’s 1am-6am parties.

The fact that Beachwood Village is a natural amphitheater–it was the precursor to the Hollywood Bowl–makes things exponentially worse.* Every sound is magnified. A couple of nights ago, two children and their father were calling for their dog on the street above me, but it might as well have been in my bedroom. People overhear neighbors’ bedroom intimacies, phone conversations and random comments from the Beachwood Market, whether they want to or not. The only good thing about this forced eavesdropping is that it’s often difficult to know where the noise is coming from, as sounds bounce back and forth across the Canyon. (On the other hand, the distortion makes it harder to tell the cops where to go to shut down the all-night party.)

In summer, construction-related noise makes it impossible to be outside during the day. Currently, we’re under siege because the streets are being dug up for new sewer lines. Trucks grind their way up Beachwood Drive at 7am, after which jackhammering goes on until 4:30pm, with an hour off for lunch. I work wearing Bose noise-cancelling headphones, as I did during my first and second summers here. During those years, my across-the-street neighbors built a 20-foot-high retaining wall and, the following summer, had it faced with stone that was cut, deafeningly, in front of their house. They managed to go on vacation during the worst of it, leaving their neighbors to endure weeks of ear-splitting noise.

Then there are the parties. There currently are four “party houses” in the upper Canyon–houses rented to tenants who hold all-night parties. This number doesn’t include houses, like the one around the corner from me, that are owned by people who party all night. After more than two years of sleepless Saturday nights, I finally impressed upon my neighbor that I wasn’t going to lose any more sleep over her noise–which, thanks to our topography, is funneled directly into my bedroom. The next step, I promised, would be lawyers.

Since then, her party noise has died down dramatically. Perhaps this is because of my threat, but I suspect it might have something to do with my neighbor’s loud nocturnal fights with her boyfriend. These can be heard two houses away, but at least they don’t go on all night.

Next time: High season for tourists.

You are currently viewing the archives for July, 2011 at Under the Hollywood Sign.