Gloria Swanson is best known for her blockbuster role as the 50-year-old, over-the-hill film goddess Norma Desmond in “Sunset Boulevard,” but her early, wide-ranging Silent film career deserves equal notice. Unlike most actresses of her era, Swanson excelled in both comedic and dramatic roles, beginning in comedies as a 17-year-old at Essenay Studio in Chicago. She soon moved to Los Angeles, where Mack Sennett turned her into a Keystone star. But Swanson wanted to be more than a comedienne: she was determined to be a romantic leading lady. In Cecil B. DeMille’s 1919 hit, “Don’t Change Your Husband,” she became one.

She was only 20 when DeMille made her a dramatic star, but she had already been married and divorced, having entered a disastrous 2-month marriage (at 17) to Wallace Beery. Beery not only raped her on their wedding night but, upon discovering she was pregnant, gave her an abortion-inducing drug. She would soon embark on the second of six brief marriages, only the last of which, undertaken in her late 70s, lasted longer than five years.

Nevertheless, it was her not-so-secret romance with Joseph P. Kennedy, circa 1927-1930, that cemented Swanson’s reputation as a femme fatale off-screen as well as on.  Kennedy was not only a permanently married Catholic but a father of seven children (with two yet to come). Such was Swanson’s appeal that he rapidly became not only her paramour (she was married at the time to the poshest of her husbands, the Marquis Le Bailly de la Falaise de la Coudraye) but her film producer and business partner. Swanson and Kennedy’s most famous collaboration, “Queen Kelly,” was considered a disaster upon its release but later grew to be considered one of Swanson’s best films.

When the couple split in 1930, it was over money–Kennedy’s flagrant spending of Swanson’s, which the actress complained about throughout her life. Fortunately, Swanson was a canny investor in real estate. In addition to her magnificent Beverly Hills home–the 22-room King Gillette mansion at 904 N. Cresent Drive–she at various times owned valuable properties in London, New York and Portugal, and seems never to have owned fewer than two houses at a time.

She also had a secret home in Los Angeles: this mid-twenties Norman manor in Hollywoodland. 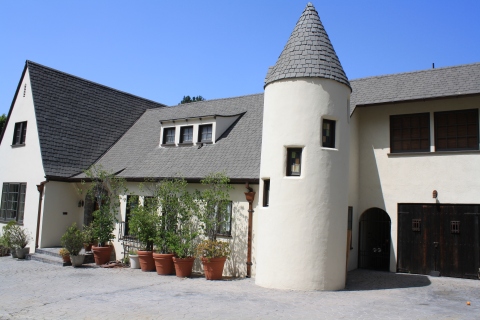 Although it was never her official residence, Swanson certainly spent time at the house, a fact confirmed by an elderly neighbor when the current owner bought it during the 1970s. It seems more than likely that the house was a love nest for Swanson and Kennedy, a place for them to enjoy each other’s company out of the public eye. She couldn’t have chosen a better location: even if her neighbors knew about the affair, they were unlikely to have gossipped about it–privacy having been a hallmark of Hollywoodland since its beginnings in 1923.

I’ve learned that liking “Blade Runner” doesn’t necessarily lead to writing about it, at least not for readers of UTHS. I didn’t receive a single essay, so it’s back to blogging as usual. Coming next: a certain Silent star and her Hollywoodland love nest(s). 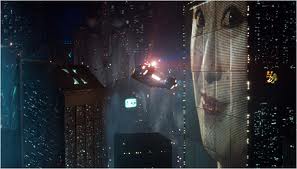 A New Life Awaits You in the Off-World Colonies….

Remember my Blade Runner contest? It’s still on; the deadline is June 15th.  Email your essays (700-1000 words) on “Blade Runner” to me at hopeanderson09@gmail.com with “Blade Runner Contest” in the heading. I’ll publish the winning entry on this blog; the writer will get an interview and a free DVD of “Under the Hollywood Sign.” The winner will be announced June 20th.

You are currently viewing the archives for June, 2011 at Under the Hollywood Sign.