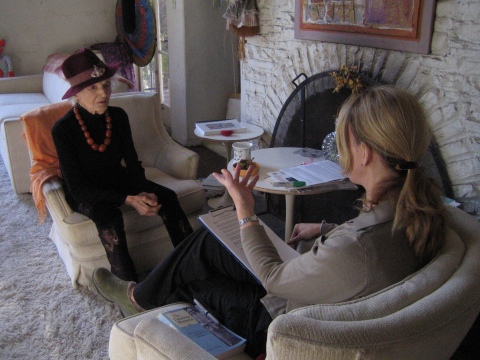 When I began planning my documentary, “Under the Hollywood Sign,” in 2006, various Hollywoodland  neighbors said, “You’re going to talk to Laura Huxley, of course.” Once I got over my disbelief that Aldous Huxley’s widow could be alive, it was simply a matter of sending her an email, which led to a phone conversation and an invitation to her house on Mulholland Highway.

Having been warned that Mrs. Huxley had lost much of her eyesight to macular degeneration, it was a shock that Sunday to discover her alone in the house with the front door was wide open. A tiny, elfin figure, she greeted me and said, “You are blonde, no?” before announcing there was a bird in the house, and that I would have to remove it.

A hummingbird was trapped in the double-height living room, banging desperately against the panes of an enormous arched window. I felt I had wandered into a Garcia Marquez novel. I also suspected my efforts wouldn’t succeed, given the size of the room and a previous experience with a trapped hummingbird, but said I would do my best. It was not a promising start, as the ensuing conversation was punctuated by her frequent commands to shoo the bird toward an open door in the dining room. Eventually, however, two miracles occurred: the bird flew out, and Mrs. Huxley agreed to an on-camera interview.

On the appointed day, I returned to the house with my camera crew. We had planned to do the interview outdoors, but it was far too windy, so while the DP began setting lights in the dining room, I explained to Mrs. Huxley that the interview would have to be held inside, away from the noise of the wind. She responded by refusing to be interviewed at all, claiming the lighting hurt her eyes. Having had similar experiences (always with elderly women) on my first documentary (“Jim Thompson, Silk King”), I had previously arranged to interview  her assistant, Stephanie Horsley, about life in Hollywoodland during the 1960s. So I went ahead and interviewed Stephanie while Mrs. Huxley sulked in the living room. By the time we finished, she had changed her mind.

Unfortunately, it wasn’t smooth sailing from then on. Mrs. Huxley suddenly announced she wouldn’t sign my release without seeing the edited result. I now had the choice of canceling the shoot or going ahead, despite the possibility that she would never sign the release, rendering the interview unusable. It was a dilemma I hadn’t faced before. In the end, I did the interview, which yielded some good stories about her impressions of Hollywoodland and her life with Aldous Huxley. Afterwards, I went to the expense of editing a segment I might never be able to use, trying to anticipate far in advance of finishing the documentary which parts I might eventually need. Time was of the essence, not only because Laura Huxley was 95, but because she was terminally ill with cancer.

Fortunately, she later approved the segments and signed the release. By then, I had read her memoir, This Timeless Moment (Celestial Arts, 1968, 2000) and researched her long and remarkable life.

Born in Turin, Italy in 1911, Laura Archera was a violin prodigy who came to the United States to perform. Prevented by World War II from returning home, she came to Los Angeles with her companion, Ginny Pfeiffer, and played in the LA Philharmonic.

She also discovered Hollywoodland, which she loved for its nature and solitude, where she befriended Aldous Huxley and his wife Maria, who had left Europe in the late 1930s. After Maria died in 1955, Aldous and Laura grew closer, and surprised their friends by marrying the following year.

Although not literary like Maria, Laura shared Aldous’s philosophical adventuresomeness. Through a mutual interest in alternative medicine, the Huxleys became active in the counterculture of the late 1950s and 60s, befriending Timothy Leary and Ram Dass and experimenting with LSD. In our interview, Mrs. Huxley, while acknowledging that many young people were hurt by LSD, took a benign view of the drug. “Sometimes you have a hellish experience and sometime you have a heavenly experience….It’s like anything else, it’s what you do with it,” she said.

After giving up her music career, Laura Huxley began a theraputic practice and wrote books (such as You Are Not the Target) promoting self-healing through mental exploration. Later she turned her focus toward children, starting a foundation on their behalf. But she never escaped her association with LSD, particularly after she wrote about injecting Huxley with the drug, at his request, as he lay dying.

Aldous Huxley died less than eight years after their marriage, on date of President Kennedy’s assassination. At the time of Laura Huxley’s death in December of 2007, she had been his widow for 44 years and outlived most of her friends and associates, including Timothy Leary, Christopher Isherwood and even her stepson,  Matthew Huxley. Still, her memorial service in 2008 offered many reminders of the 1960s, including a reading of her essay on Aldous’s final hours and a videotaped message from Ram Dass. Best of all, however, was the parting gift we attendees received: an LP of her therapeutic “recipes for living.” After dragging my turntable out of the garage and setting it up, I was startled to hear her heavily accented voice again, intoning, “Imagine that you’re completely surrounded by flowers…flowers far and near…an infinity of flowers….”–and to realize that I missed her.

You are currently reading Remembering Laura Archera Huxley at Under the Hollywood Sign.