Preston Sturges and Harold Lloyd: A Tale of Two Houses

In 2009, I wrote about my search for Preston Sturges’s Hollywood house, which I assumed had been torn down in the late 1940s to make room for the 101 Freeway. After reading in Sturges’s memoir that, in lieu of demolition, he had the house cut in 3 pieces and moved to Vista Street, I immediately drove over, found the only house that matched its description, and took this photo: 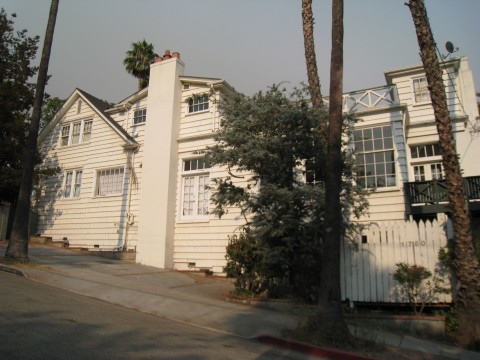 I hadn’t been back until last week, after Steve Pond of The Wrap contacted me to ask if he could use my “before” photo in an article about the house, which in the interim had been bought and renovated by the actors/contractors Jeremy Renner and Kristoffer Winters. http://www.thewrap.com/movies/column-post/jeremy-renner-his-house-flipping-sideline-it-keeps-me-grounded-25878?page=0,0 I agreed, he linked my piece about the house, and I enjoyed a brief spike in traffic to this site. When I went by to take the “after” picture, I was impressed by the house’s handsome exterior. No longer clad in tired-looking white shingles, it boasts new clapboard, windows and metalwork, and a much nicer color scheme. It probably looks better now than when Sturges lived there, though without period photos there’s no way to be sure.

According to Pond’s article, this is the latest in a long line of houses that Renner and Winters have bought and rehabilitated, but it will be the last for a while, given Renner’s acting commitments.

Meanwhile, over in Windsor Square, the house once lived in by Sturges’s friend Harold Lloyd looks as horrible as it did when I wrote about it in June, 2009. https://underthehollywoodsign.wordpress.com/2009/06/05/harold-lloyd-lived-here/ But I’m hoping that when the second-generation owners finally decide to sell, Renner and Winters will have time to work their magic on it.

You are currently reading Preston Sturges and Harold Lloyd: A Tale of Two Houses at Under the Hollywood Sign.