Lyman Frank Baum was a former poultryman, actor, playwright, newspaper reporter, editor and traveling salesman who transformed his life in middle age by writing The Wizard of Oz. A groundbreaking best-seller that dispensed with the moralizing and scaremongering that had characterized children’s literature, The Wizard of Oz came to be considered the first modern children’s book, an instant classic whose appeal never faded.

Though invented in Chicago, the Emerald City of Oz is in many ways similar to Hollywood at the turn of the century:

There were lovely patches of green sward all about, with stately trees bearing rich and luscious fruits. Banks of gorgeous flowers were on every hand, and birds with rare and brilliant plumage sat and fluttered in the trees and bushes.

But the comparisons between Hollywood and Oz went beyond natural beauty and climate. For the tens of thousands of Chicagoans who relocated to Southern California between 1900 and 1930, Los Angeles represented a new kind of city. Unlike Chicago, Los Angeles was free of machine politics (a feature ensured by its weak mayoral system) and rigid social hierarchy–just like Oz. Writes Kevin Starr:

Oz was beautiful; it was also a tidy, prosperous utopia, recognizably mid-American in its benevolent technology and bourgeois prosperity….Unbothered by poverty, served by proper machines in lovely gardens, cared for by a benevolent political order, the citizens of Oz were able to concentrate on the business of living, which for them was the life of emotion and imagination….

By moving to Hollywood, Frank Baum underscored its connection to Oz. (In the same vein, he named his cocker spaniel Toto.) Although he, his wife Maud and their four sons were already part-time Californians, having spent six previous winters at the Hotel del Coronado, they now would be full-time citizens of a real-life utopia.

Baum built his dream house at Cherokee and Yucca and named it Ozcot. The house featured an enormous fireplace, a library and solarium and, in typical Midwestern style, a large attic. As he had for the Hotel del Coronado, he designed beautiful lighting fixtures for the dining room. In the large garden, Baum grew dahlias and chrysanthemums that brought him fame as a serious, prize-winner horiculturalist.  He also raised chickens, as he had in his youth. 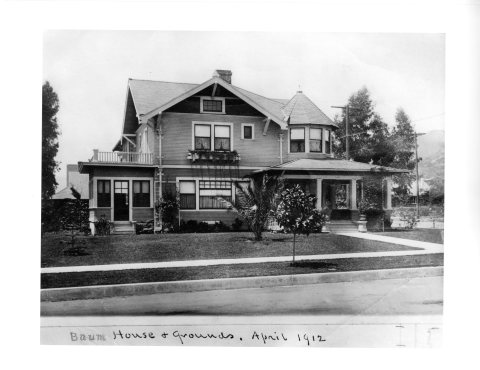 Baum joined the Uplifter’s Club (now defunct but still remembered by local old-timers), as well as all the other clubs in Hollywood, and was an enthusiastic civic booster. Not content to be merely a famous author, he founded his own studio, the Oz Film Manufacturing Company, with fellow Uplifters in 1914. The studio produced ten films that were technologically advanced for the day, including the original, silent “Wizard of Oz,” before going broke and being sold to Universal.

Going broke was a familiar occurrence for the Baum family. Although Frank Baum was a prolific writer of novels–including 13 sequels to The Wizard of Oz–short stories, plays and poetry, he had money problems throughout his life. The product of a wealthy family, he lost vast sums on failed theatrical productions, one of which, “Fairylogue and Radio Plays” drove him into bankruptcy. The mind that created Oz (named for the O-Z drawer of his filing cabinet) was not adept at business of any kind. (From 1888 to 1890, the Baums owned a general store in the Dakota Territory; even that potential goldmine failed.) The funds for Ozcot, and probably the Oz Film Manufacturing  Company, came out of Maud’s inheritance from her mother, the feminist Matilda Joslyn Gage, and her father, a merchant. Maud, a Cornell graduate, took up sewing to keep the family afloat as Baum veered in and out of debt.

Frank Baum had suffered from heart problems for years, and the stress of his failed studio probably contributed to the stroke that killed him in 1919, at 63. His last words purportedly were, “Now we can cross the Shifting Sands,” a reference to his best-known book.  Although the Technicolor version of “The Wizard of Oz” would not appear until 1939, Maud and their sons were alive to see its success–and to reap $40,000 of its income .

“The Man Behind the Curtain: L. Frank Baum and The Wizard of Oz,” by Linda McGovern, literarytraveler.com

§ 4 Responses to L. Frank Baum: The Wizard of Hollywood

You are currently reading L. Frank Baum: The Wizard of Hollywood at Under the Hollywood Sign.