The Agrarian Origins of Beachwood Canyon 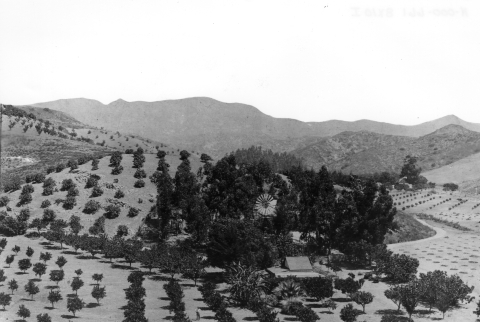 Although many people think Hollywood sprang into existence at the start of the movie industry, its history as a settlement pre-dates not only the 20th century but the Spanish Colonial period. The area was settled ten thousand or more years ago by Tongva Native Americans, some of whom were still living in Beachwood Canyon at the turn of the 20th century. (It was the Tongva who paddled out to meet Cabrillo’s ship in 1542; they truly were the first Angelenos.)

During the Colonial period, the future Hollywood was part of the San Fernando Mission–its outlying pastures, on which sheep grazed. In 1887, Harvey and Daeida Wilcox founded their Christian utopia as an agrarian village–one that had more orchards than houses. 19th- century Hollywood produced excellent lemons, poor oranges (used for orange soda, not fresh juice), flowers immortalized by the painter Paul deLongpre, and some rather exotic fruits and vegetables. Among the crops that were grown in Hollywood’s orchards were bananas, figs, apricots, avocados, dates, pineapples and chermoyas.

It was this  bounty, made possible by a frostless climate and more than 300 sunny days each year, that attracted the Theosophical Society to Beachwood Canyon in 1911. The Theosophists were vegetarian, and thus naturally drawn to agricultural self-sufficiency; the perfect climate of Southern California was a major reason for their relocation from Chicago. In a letter to Annie Besant, then president of the Theosophical Society, A.P. Warrington, the head of the American branch, wrote:

We can make the spot a veritable Garden of Eden, because….the region we have chosen happens to be one of those rare spots that are [sic] absolutely frostless, and so we can raise anything…

The Krotona Colony included fields and gardens– presumably worked by its members, though I’ve seen no photographs proving it.

The mystery in all of this is how these farmers managed to coax crops out of  Beachwood’s soil. Thin and nutrient-poor, it sits atop solid granite, the result of which is geological stability–we barely feel earthquakes–and the constant appearance of rocks and stones. Since moving to Beachwood 5 years ago, I’ve struggled to make something of my garden, despite assiduous efforts at soil enrichment. Although roses do well with regular applications of compost and fertilizer, vegetables grow with limited success, and only in boxes. Interestingly, the ten fruit trees I’ve planted have stayed true to historical precedent, producing terrible oranges (if any), but wonderful lemons, peaches and apricots. This year, I planted a green gage plum whose first crop I’m eagerly anticipating; more on it, and the “Pineapple Tract,” in a future post. 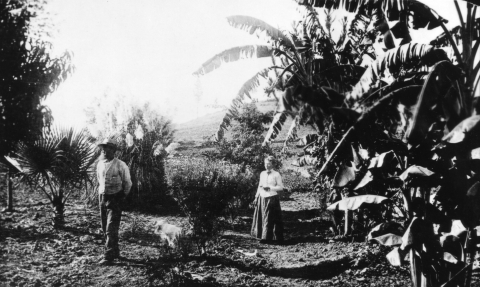 § One Response to The Agrarian Origins of Beachwood Canyon

You are currently reading The Agrarian Origins of Beachwood Canyon at Under the Hollywood Sign.