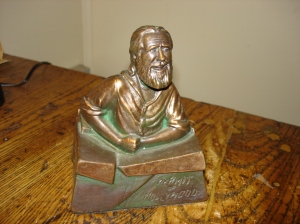 Richard Hatfield sent me these pictures of a bronze bust he recently bought of Peter the Hermit. Like Jean Hawkins’ bookends, it appears to have been produced for the tourist trade in the late 1920s.

Not bad for a man who lived in a tent, hermit-style, in Beachwood Canyon. Peter turns out to have been a canny entrepreneur, supplementing his picture-posing income with a trove of memorabilia. In contrast to today’s imitators, he was unfettered by competition and faced no legal issues by profiting off his Biblical character.

Still, his inventiveness and marketing savvy put them to shame.

§ One Response to Peter the Hermit, Hollywood Entrepreneur

You are currently reading Peter the Hermit, Hollywood Entrepreneur at Under the Hollywood Sign.