Beachwood’s Scofflaw Tourists: ‘Just Get Us to the Hollywood Sign, Residents Be Damned’ 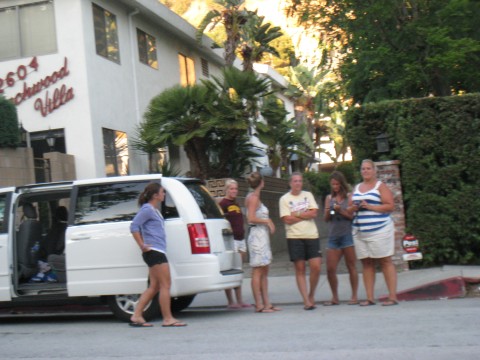 Last Thursday night’s packed meeting of the Beachwood Canyon Neighborhood Association brought forth a torrent of stories about the ever-increasing number of tourists coming into the Canyon to see the Hollywood Sign. Arriving by bus, van and rental car, they not only throng Beachwood Drive but the narrow residential streets that run off it, creating gridlock.

As the tourists’ objective–to get photos of themselves in front of the Hollywood Sign–has become more ambitious, it has put residents in an increasingly dangerous and frustrating situation. GPS has made it easier for visitors get nearer to the Sign, where they create chaos on the already treacherous access roads. On a recent weekend, so many cars came up Durand Drive that they completely blocked access to the fire road  running along the top of Griffith Park, to say nothing of the houses along the way.

Residents who live below the Hollywoodland gates described having their driveways blocked by tourist vans and rental cars, public urinaton and flower-picking (presumably not simultaneous) by trespassing tourists, and a pervasive atmosphere of lawlessness. This goes on all day  every day, as tourists stand in the middle of Beachwood Drive, weave in and out of traffic or simply stop their cars in the middle of  the two-lane road to take pictures, halting all traffic behind them.  Objections to this illegal behavior are met with curses and jeers: how dare we, the residents, stand in their way?

Everyone who lives in the Canyon has narrowly missed hitting tourists who dash in front of their cars to pose for pictures in the middle of Beachwood Drive. My own close call came a couple of years ago, when a father who was photographing his children on Beachwood pushed them directly in my path as I drove down the hill. Only fast reflexes and good brakes prevented a catastrophe. 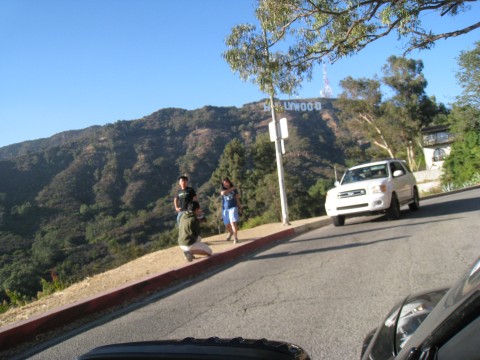 Last night’s meeting focussed on tour buses and vans, whose numbers and reach have increased dramatically in the past few years. No longer is it just a matter of the Starline Tours trolley bus stopping for pictures near Glen Oak before turning around at the Village. Open-air vans now transport smaller groups all the way up to Lake Hollywood Park, adding to the already hazardous conditions on Ledgewood Drive and Mulholland Highway. The van drivers also use microphones to point out the sights, creating a jarring monologue that residents hear many times a day, even behind closed doors. (Thanks to the efforts of Councilmember Tom LaBonge, tour operators have pledged to switch to headsets.) 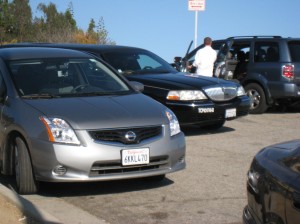 Parked Cars at the Intersection of Mulholland Highway and Canyon Lake Drive, 5:55pm

One of Tom LaBonge’s ideas was to petition the government to relocate the GPS for the Hollywood Sign to Lake Hollywood Park. Nice try, but he should know that the area is already overrun with vans and cars. The intersection of Mulholland Highway and Canyon Lake Drive, where the Lake Hollywood lookout is located, is so clogged with parked and double-parked cars on both sides that access on the steep hill is sometimes limited to a single lane. Cars also stop illegally on the winding ridge of Mulholland, forcing traffic to pass on blind curves. As someone who drives that route five times a week, I can attest that head-on collisions are only narrowly averted. 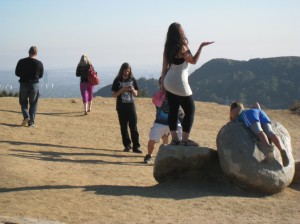 What is to be done? I hate to say it, but no substantive change is likely until a tragedy occurs. It’s going to take a fatal accident caused by the lawless behavior of Beachwood tourists to change things because the reasonable alternative–seeing the Hollywood Sign from afar–isn’t an option anymore. As for the pictures that accompany this article, all were taken in the space of an hour on a relatively slow night. But you get the idea.

§ 5 Responses to Beachwood’s Scofflaw Tourists: ‘Just Get Us to the Hollywood Sign, Residents Be Damned’