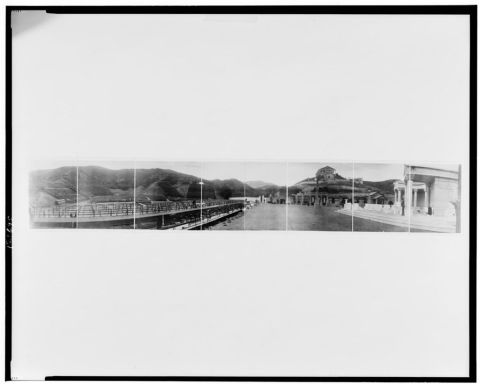 The Set of "Julius Caesar" in the Future Beachwood Village, 1916/Courtesy Library of Congress

Conceived as a tercentennial commemoration of Shakespeare’s death, Beachwood Canyon’s 1916 production of “Julius Caesar” was an event of epic proportions. A one-night-only performance, it involved 5,000 players–actors, dancers, gladiators and the student bodies of Hollywood and Fairfax High Schools–and starred Tyrone Power as Marcus Brutus and Douglas Fairbanks as Young Cato. Other notables in the cast were William Farnum (Cassius), DeWolf Hopper (Casca) and Mae Murray (Barbaric Dancer). The Battle of Philippi was re-created by sword-wielding actors who fought their way up Beachwood Drive onto a vast stage constructed on the future site of  Beachwood Village. The play was performed before an audience of 40,000–at a time when the population of Los Angeles was only 852,000. According to a newspaper account, there was a single fatality–an elderly woman who fell on the walk up to the amphitheater and did not regain consciousness.

The only known photograph of the momentous night is the panoramic photo of the set reproduced above. For those familiar with the area, the bleachers in the first four panels occupy the west side of Beachwood Drive from Belden to (approximately) Woodhaven. Panel 5 shows Cahuenga Peak, future home of the Hollywoodland Sign. The temple in panels 6 and 7 stands at the top of Westshire, while the main stage occupies the east side of Beachwood Drive from Hollywoodland Realty to (approximately) Woodhaven.

The lavish sets came courtesy of D.W. Griffith, Jesse Lasky, Thomas Ince, Mack Sennett and Universal Film Corporation. Although there is no account of the animals involved in the play, there must have been horses, probably supplied by what is now Sunset Ranch. The production apparently was a huge success, with  profits from ticket sales–$2,500–donated to Actor’s Equity. An encore performance, produced by Griffith and Sennett, was held a few weeks later at the Majestic Theater downtown.

Why was Beachwood Canyon chosen for this extravaganza? Primarily, it was because the location was (and, as Hollywoodland residents can attest, still is) a natural amphitheater where every sound would be amplified exponentially. The bowl shape of the future Beachwood Village provided the perfect contours of a theater. Moreover, the area was both unbuilt and easily accessible via the Franklin Avenue streetcar.

The success of the 1916 “Julius Caesar” led directly to the Theosophical Society’s 1918 production of “The Light of Asia,” a pageant based on Edwin Arnold’s epic poem on the life of the Buddha. That hit led  its Theosophist organizers to search for a permanent amphitheater for large-scale and (they hoped) inspirational pageants. One of the pageant’s stars, H. Ellis Reed, soon discovered in nearby Daisy Dell not just a larger version of Beachwood Canyon but the largest natural amphitheater in the United States. Once the land was purchased by “Light of Asia” organizer Christine Weatherill Stevenson and another wealthy arts patron, Mrs. Chauncey D. Clarke, construction began on what would become the Hollywood Bowl. Although Stevenson ended her involvement (and was reimbursed for her share of the purchase) when other organizers decided the Bowl would fulfill a civic rather than religious function, she must have been pleased by the Bowl’s first large-scale event: the Easter Sunrise Service of 1921.

Among the Hollywood Bowl’s other early spectacles was a 1922 production of “Julius Caesar,” also starring Tyrone Power and a cast of thousands. This time, photos survived; they will appear in a future post.

I am indebted to the following authors and sources:

§ 10 Responses to When Shakespeare Came to Beachwood Canyon: “Julius Caesar,” 1916

You are currently reading When Shakespeare Came to Beachwood Canyon: “Julius Caesar,” 1916 at Under the Hollywood Sign.