“Grey Gardens,” Albert Maysles and Me

Although I’d known about “Grey Gardens” since its theatrical release in 1976, I didn’t have a chance to see it until its appearance on video in the  late 90’s. I remember watching it alone in my bedroom, at once spellbound by Big Edie and Little Edie and horrified by the squalor in which they lived. The film was fascinating, baffling and gorgeous. It swept me up into the Bealeses’ world as it unspooled.

Because “Grey Gardens” was unlike any documentary I’d seen, it was hard to assess. I both loved and was troubled by it, and I had questions. Were the Bealeses exploited by the Maysleses? Was this a mother-daughter love story, or one of maternal oppression? Were they both crazy? If not, which one was? And finally, was Little Edie an object of pity or an artist whose genius lay beyond the limits of my understanding?

Within a year of seeing “Grey Gardens,” I happened to meet Albert Maysles at a documentary conference in Los Angeles.  Cornering him outside a lecture hall, I blurted out my plan to make a documentary on the life of Jim Thompson, the American OSS Officer turned Thai silk magnate who vanished in Malaysia in 1967. I asked him what he thought, and he said something like “I think that sounds like a good idea.” (Coincidentally, Werner Herzog was there, too; he merely said, “I haf heard of zis man.”) Delirious from Maysles’s encouragement, I nevertheless remembered to compliment “Grey Gardens.” Beaming, he said in his thick Boston accent, “Isn’t it beautiful?”

All of this came back to me last week as I watched the new theatrical version of “Grey Gardens” on HBO. What could have been a train wreck turned out to be a beautifully acted and well-written treatment of the Bealeses’ story. While the documentary asked more questions than it answered, the movie did the opposite by tracing the Bealses’ descent from society into squalor in precise, logical flashbacks. Watching the documentary, I could never figure out how these two women–Edith Wharton heroines tranported to the latter 20th century– could appear sanguine about their impoverished lives in a filthy, broken-down house ; watching the HBO adaptation, I understood. Like enchanted princesses, the Bealeses carried their aristocracy within them. Their outward circumstances were simply that: outward and circumstantial. They were beyond the cares of ordinary life. Amid the squalor of  Grey Gardens, Big Edie and Little Edie, like storybook royalty, remained original, noble and nothing like the rest of us.

This was done by Nathan Church, who managed to make sense of my concept via e-mail from London. Many revisions later, here it is. Thanks, Nathan. 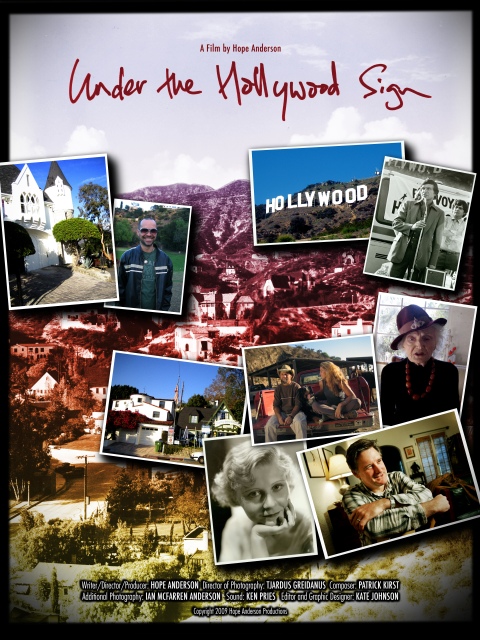 You are currently viewing the archives for April, 2009 at Under the Hollywood Sign.